[RCG 06.01.13] As Venezuelan President Hugo Chavez remains seriously ill in hospital in Cuba, following complicated surgery for cancer, the vultures of reaction are circling. Counter-revolutionary forces within Venezuela and their backers in the US, UK and Europe are conducting what National Assembly President and United Socialist Party of Venezuela (PSUV) leader Diosdado Cabello has described as ‘a psychological campaign of media warfare’ in an attempt to foment the destabilisation of the Bolivarian Revolution. 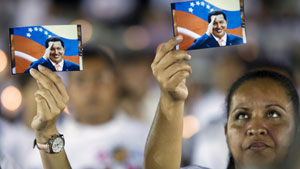 Despite a clear statement from Venezuela’s vice-president Nicolas Maduro, who recently visited Chavez in Cuba, that the president, although in a very delicate and serious condition, is walking and talking and indeed keen to discuss politics and the economy, Venezuela’s privately-owned newspapers and the international media have consistently exaggerated rumours of Chavez’s condition and accused the president of lying about his illness. They have also attempted to whip up uncertainty about what will happen if, as seems likely, Chavez is not well enough to travel back to Caracas in time to be sworn in for his fourth term as president on 10 January. Some leaders of the opposition group Mesa de Unidad Democratica are demanding that fresh presidential elections be held immediately.

In reality, as the governing party has made clear, Article 231 of the constitution provides for the swearing-in to be held before the Supreme Court at a later date.

But the big lie perpetrated by the bourgeois press is, as ever, that without Hugo Chavez there can be no Bolivarian Revolution – that it lives or dies with him. Nothing could be further from the truth. Despite Chavez’s definitive victory in the October Presidential elections and the mass popular support and admiration he enjoys as the living embodiment of the aspirations of the Venezuelan people, the Bolivarian Revolution has never been about just one man. It is a revolution being built from below, by the conscious organisation of the Venezuelan working class to transform society from one of neoliberal exploitation, hunger, sickness and poverty for the majority, to one built on the model of collective, socialist organisation and production. In the last ten years, Venezuela has achieved the lowest levels of inequality as measured by the Gini coefficient of any country in the region; it has wiped out illiteracy, brought infant mortality down from 25 per 1,000 to 13 per 1,000 live births, slashed levels of extreme poverty, provided free health care and education for all, built hundreds of thousands of units of social housing and ensured that – unlike in Britain – no child goes to school hungry in the morning.

The Venezuelan people will not allow these vital gains to be lost. The tremendous popularity of the governing PSUV was demonstrated again in December’s regional elections, where the party won 20 out of 23 states. On Saturday, the National Assembly will convene for its 2013 session and members of the new executive, chosen by Chavez immediately after the October elections, will take their seats, led by vice-president Nicolas Maduro. They will implement the Programa Patria manifesto on which Chavez was elected – step by step, task by task, with the Venezuelan people, ‘developing socialism beyond the point of no return’. Our task here is to combat the lies of the imperialist press and build solidarity with that process.

The RCG sends it solidarity greetings to Comrade President Hugo Chavez and wishes him a full recovery from his long and painful illness. Comandante, we salute you.