Letters to the Guardian 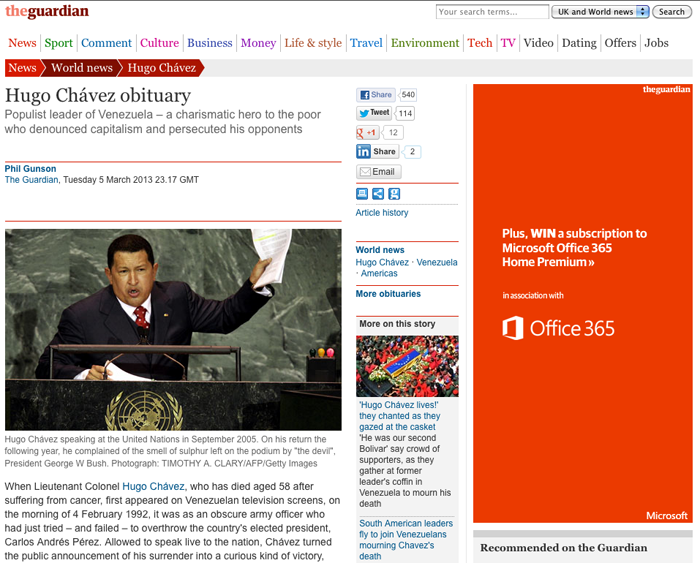 So Phil Gunson in his obituary of Hugo Chavez is now of the view that in 2002 ‘On 11 April, after hundreds of thousands had marched on the presidential palace to force him out and a score of civilians, from both sides, had been shot dead in circumstances never fully explained, senior military officers turned against him.’ This is not what he thought at the time when he wrote for the St Petersburg Times:

“’No one was expecting it. It was an ambush,’ said local journalist Eurídice Ledezma, who described seeing plain-clothed snipers firing from the roof of the Caracas town hall, a bastion of government supporters.” This was the source of the world-wide stories that Chavez supporters were entirely responsible for the attacks. Later that day Chavez was deposed.

Ledezma was both a friend (undisclosed) of Gunson and of Pedro Carmona who headed the short-lived post-coup government. Having written a story at the time which effectively pinned the blame for the ambush on Chavistas, I wonder why Gunson is so coy now? I think we should be told, since all the available credible evidence points to actions by agents provocateurs to provide a justification for the ensuing coup attempt. Gunson's journalism played a role in these events, and not a creditable one.

Dear Sir
I was disappointed to see that the Guardian had entrusted Phil Gunson with writing the obituary of Venezuelan president Hugo Chavez (7 March 2013) without at least alerting to readers to his highly partisan history of reporting on  the political situation in Venezuela. This was particularly marked during the 2002 coup against the Chavez presidency, where his irresponsible allegations in the St Petersburg's Times that it was pro-Chavez snipers who had fired on and killed protesters in the streets formed part of an opposition media offensive aimed at justifying an illegal coup against an elected representative  (a coup generally now accepted to have had at least the tacit approval of the United States, if not its outright backing.) Gunson's allegations were based on a single, pro-opposition source who was personally known to him (although he did not reveal this at the time). Personally known to him also was a former director of the Venezuelan oil company PdVSA, Eric Ekvall, a supporter of the opposition would-be president Pedro Carmona. It was the Venezuelan government's strengthening of control over the oil industry that was one of the factors behind the coup, organised by a business class who feared losing their privileges. Gunson's reporting was not error but sprang from his deep antipathy to Chavez, whom he called (in a radio interview later that year) a 'buffoon' whom the Venezuelan majority wished they could vote out of office; this ignored the fact that Chavez had already won six elections, internationally recognised as free and fair, at that point and would go on to win three more. But Gunson didn't seem that bothered about democracy at the time, going on to say, 'I believe the only way that Chavez will eventually leave is when the armed forces tell him to, as they did back in April'. In life, Hugo Chavez was adored by Venezuela's impoverished masses because   they saw material and political gains they experienced in his fourteen years of leadership and loathed by a bourgeoisie no longer able to enrich themselves from the country's resources. In death, Chavez deserves better than to have his obituary penned by someone who embraced the cause of his political enemies.
Cat Allison
Viva Venezuala
vivavenezuela.co.uk