Internationalism And Solidarity From Newcastle 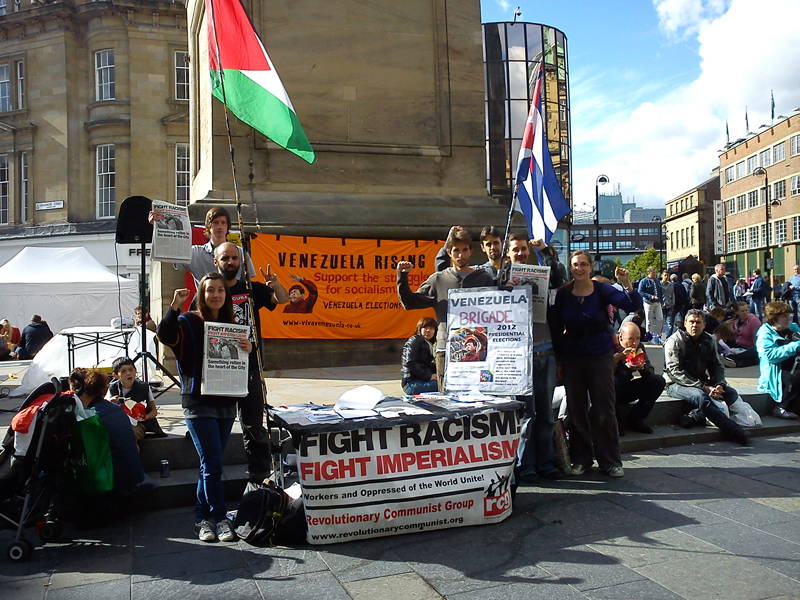 [RCG 01.10.12] On Saturday 21st September 2012, members of the Revolutionary Communist Group and their newspaper Fight Racism! Fight Imperialism! held a rally in Newcastle in solidarity with Venezuela, raising awareness of the upcoming Presidential elections. Supporters of FRFI spoke about how crucial these elections will be, not only for Venezuela's Bolivarian Revolution and Latin America, but also for the international struggle against imperialism, austerity, poverty and war.

The speeches discussed the realities of people organising and taking more political and economic power in Venezuela, driving Chavez and his government forward. The gains made by an increasingly organised working class were celebrated, from huge reductions in poverty and the organisation of communal councils, to the strengths of ALBA, challenging the lies of the ruling class media.

Speeches explaining the impact of these changes on the working class in Venezuela stopped people in the street in Newcastle, keen to hear what free healthcare and education has meant for the population. 'Mission Miracle', a programme offering free eye surgery with support from Cuba, has improved the eyesight of over 1.5 million people; many of these have gone on to learn to read through 'Mission Robinson'. These changes have meant that people have been able to get involved and organised, often for the first time. For Venezuelans this means involvement in voting, community organising and allocating resources.

Whilst not aiming to make simple comparisons between Venezuela and Britain, the speakers' exposure of the ruling class cuts here made for a stark contrast. Restrictions on the number of cataract operations in Britain, based on cost reduction, was just one example of the attacks on people's right to healthcare.

The message was clear - cuts to benefits and services, along with privatisation and unemployment, are affecting the most vulnerable first - and worse is yet to come. Similarly, the continual increase in tuition fees in England and Wales, combined with fewer teaching hours and with more private providers, is taking away the right to an education for the working class, whilst in Venezuela it is illegal to pay for education.

What was expressed most keenly was the need for the working class to get organised and fight back worldwide. The fight of the working class in Venezuela is our fight. It is a source of inspiration; not only in seeing what is possible, but in fighting against austerity in Britain, imposed by a ruling class which never consulted us.

Crucially, the speeches discussed the process of building socialism, with its inherent contradictions. The challenges of facing up to a powerful bourgeois opposition and media, and the difficulties of driving things forward in a capitalist world, were made clear.

However, supporters were also clear that it is vital and inspiring to look to people actively making these changes, and it is crucial to break the media's stranglehold and explain what is really happening.

The RCG delegation to Venezuela was mentioned in every speech, and the importance of the messages, interviews and footage that will show people actively constructing a different society, one based on need and not profit. Far from presenting a utopian idea of socialism, or an idealised version of Venezuela, the delegation is an opportunity to show that another world is being built today, and their reporting from Venezuela will certainly continue to engage and inspire people in Newcastle!