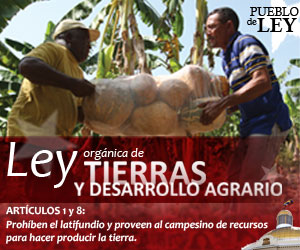 In 2010, campesinos took over the Las Mercedes estate in Guarico state and used the occupied land to produce vegetables and raise cattle.  In 2013, a Portuguese business owner with a company called AgroInteca, allegedly affiliated with POLAR (the largest agri-business company in Venezuela), claimed that he owned a large portion of land in that same area.  According to Denis, AgroInetca currently owns approximately 17,000 hectares (roughly 42,000 acres), none of which is in production. And since 2013, representatives of the company have been taking land away from the rural workers.

In response, hundreds of rural workers and their family members have organized through the commune “Land and Freedom” to regain access to the land.  On Saturday, they launched an occupation which will bring the current land under their control somewhere between 15,000-20,000 hectares (roughly 37,000-49,000), according to different reports.

The land is said to have diverse forms of soil, lakes, water sources, and potential for some reforestation.

Ispiniza also sent an environmental rallying cry, noting that the “eco-cide” had to be stopped, and that small scale agricultural production by rural workers is also an environmental solution to the ills of large-scale industry.

Ispiniza emphasized that the farmers involved in Saturday's most recent takeover of Las Mercedes were formerly sharecroppers on that land.  This is relevant because Article 13 of the 2010 Land Law presents a redistributive project based on “the socialist principle according to which the land is for those who work on it.”

The National Institute for Land (INTI) was created in 2001 and a decade later it had expropriated 3.6 million hectares of agricultural land.  In the last few years it has continued to expropriate land-holdings at a rate of 350,000-400,000 hectares a year.  Many of the expropriations have also taken place in collaboration with organized rural workers who were ready to put idle land into production, or whom had long labored as farm workers and sharecroppers but hadn't previously been afforded the opportunity to own land.

Redistributive land reforms in Venezuela have aimed at breaking up largelatifundios - enormous land holdings through which in 1998 just 0.4% of landowners held over 26% of the country’s arable land.  But, the other goal of land reform, to increase food production, is becoming increasingly relevant in light of current economic problems.

“Why do we cry so much about an economic war that doesn't allow us to develop our own food sovereignty, if the first thing that we do is repress the only subject that is capable of creating the conditions for our food sovereignty...the rural worker?” Denis told Apporea on Saturday, as the land-takeover was put into motion.

His warning spoke to the violence that rural workers have faced by paramilitary organizations funded by private landowners.  Over 300 campesinos have been killed in confrontations over land ownership, and most of these crimes have gone unsolved. Some supporters of the rural takeovers have been critical of the Venezuelan government for not providing adequate protection for rural families engaged in land occupations and for failing to prosecute those responsible for the repression.

For this reason, Denis demanded that officials be “obedient” to the campesinos, and called on members of the popular movements and urban collectives to “go to the countryside and learn from the people there.”

In response to this call to action, an organisation called the Assembly of Militants released a statement of solidarity with the rural workers engaged in the Las Mercedes land occupation and linked this action to a broader political struggle within the country.  The Assembly of Militants offered support to a “legitimate struggle to recuperate the land for sowing, socialist production, and the commune as an expression of life, liberty and justice.”

Additionally, Denis announced the need to “liberate the land,” and also called for a takeover of abandoned agricultural machinery, so that it can be put into productive use.

The Maduro government and the INTI have yet to issue a statement regarding the Las Mercedes takeover.