Housing for the people in Venezuela

Blogged by Helen Yaffe,  author of Che Guevara: the economics of revolution 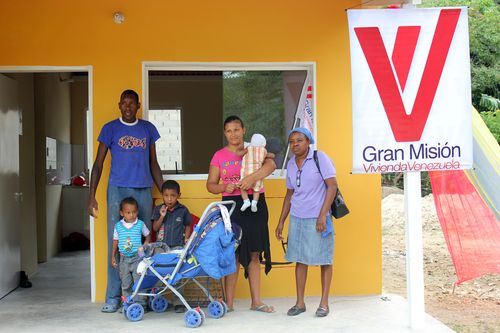 On Thursday 26 September, 2,397 Venezuelan families received the keys to new homes built under the Great Housing Mission. Initiated in 2011, the programme aims to construct 2.6 million new homes by 2019 and is well on the way to the 500,000 milestone. The new home owners were handed the keys by government ministers, vice ministers and state governors in 17 of Venezuela’s 23 states. Acts of this type take place throughout the country every Thursday.

I travelled over mountains and above clouds to the Consejo Comunal de Cumboto in Municipio Costa de Ora, Aragua State to learn about how the housing mission is organised there and to celebrate the “entrega de casas” (presentation of the houses) to members of that community. Surrounded by fertile mountains, the ceremony of entrega was presided over by Ana Maldonado, Vice Minister of the Communal Economy and General Ramos Viñas, President of the Housing Institute in the state. Despite the incessant rain the community had gathered for the ceremony and there was a party atmosphere. The exception was the brigades of mostly young workers who continued labouring on the construction of an additional 51 houses for the communal council. Their work starts with clearing the land and laying foundations. Many of them were local youngsters outside of work or education. Under this scheme of “socialist work brigades” they have received training in construction skills and many of them will benefit from the construction project. The recipients of the homes are determined democratically by the community itself, through the Citizens’ Assemblies, and in this case most of the beneficiaries are elderly people and single mothers. The population of the area is 900-1,000 and in addition to the 65 homes already built or under construction they calculate that an additional 100 homes will be needed. In some cases this work may involve dismantling rickety wooden houses to replace them with the new structures which have 2 to 3 bedrooms, sitting room, kitchen and 1 to 2 bathrooms. 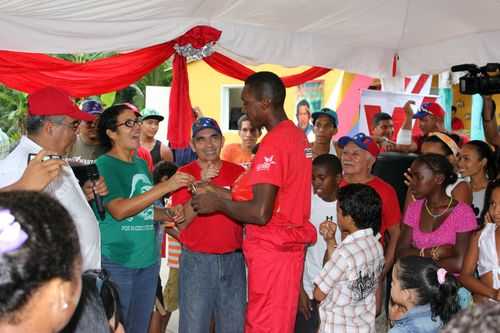 The Vice Minister and the General visited several of the new properties and spoke to the beneficiaries, community representatives and members of the community gathered. The people’s sense of pride at having constructed their own homes was palpable, without depending on private companies or even state institutions to execute the work for them. The beneficiaries, including elder women, contributed towards the construction effort in any way they could. The community gathered, most of them women with their children, under a marquee in the middle of the street where there was a sound system and a table on which were laid out, not just the 14 keys to be handed over during the ceremony, but also samples of products made from Cacao plant by a collective of 8 locals, including chocolate, punch, soaps and herbal tea. The men and women involved have received education in Cacao ecology under the Revolution and were extremely proud of their organic and diverse production. 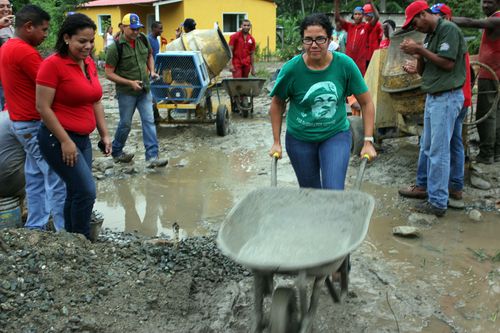 After addressing the community about the political objectives and goals of the Housing Mission, the Vice Minister and the General handed over keys to the 14 homes which have been completed. The people cheered and applauded as the women and men of their community received the keys to their new homes. The Vice Minister and the General made two announcements which were received by rapturous applause and cheers. First, that the Vice Ministry of the Communal Economy would provide micro-credits to assist with the production of Cacao derivatives and that the community producers would be invited to participate in the national production fair in December. Second, that all the new houses inaugurated that afternoon would be provided with the white goods, or kitchen equipment, within the month.

The handing over of keys to this small community was an emotional and exhilarating celebration. It will have a huge impact on their lives. Meanwhile, this type of ceremony happens every Thursday throughout the length and breadth of this big country. The experience of meeting the community and beneficiaries in the consejo communal de Cumbotes gives us some idea of the impact this will have across the nation, for the Venezuelan people.