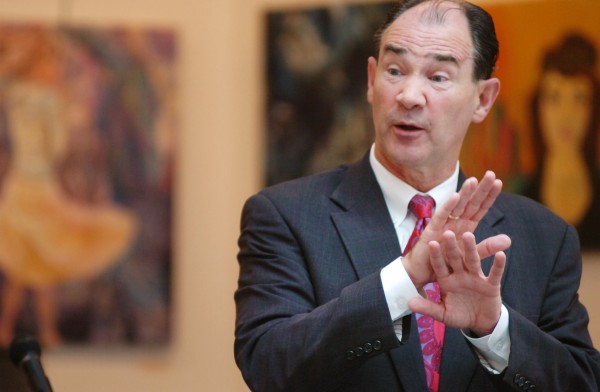 The former Ambassador was expelled from Venezuela in 2008 after the Chavez-led government cited an American-supported plot by military officers to topple it. Having initially served under Bush he returned to Venezuela at the start of Obama’s term of office.

In the paper he outlines an even wider list of options that the US may engage in. These includes that the United States “could demand that the Organisation of American States declare Venezuela in breach of its obligations as a signatory of the Inter-American Democratic Charter” or it could “bring the issue of Venezuelan democracy to the United Nations Security Council” or “freeze individual bank accounts of key figures involved or responsible and seize assets in the United States”. He suggested the US “could also arrange for the proceeds of Venezuelan government–owned corporate entities to be held in escrow accounts until democracy is restored [and] ...block access to [Venezuelan government owned] CITGO's refining facilities in the United States and consider prohibiting [Venezuelan state] oil sales to the United States”.

Duddy dresses these up as options for the US to take "in the event that the government either orchestrates or takes advantage of a violent popular reaction to Chavez's defeat...to suspend civil liberties and govern under a renewable state of exception”.

However there are obvious concerns that this fits neatly with the objectives of those within the right-wing opposition in Venezuela who are planning for the non-recognition of the coming elections if, as expected, Hugo Chavez wins. With the polls showing strong leads for Hugo Chavez, a campaign is already underway by sections of the right-wing opposition coalition to present any electoral defeat as being down to Chavez-led fraud. This has seen baseless attacks on the independent National Electoral Council (CNE,) which has overseen all of Venezuelans’ elections described as free and fair by a range of international observers. The opposition has announced plans to place tens of thousands of ‘witnesses’ at polling stations on election day and then, illegally to release its own results ahead of the official results in a clear bid to discredit them. These plans have sharpened fears that opposition-led disruptions and destabilisation will follow their defeat. This could easily meet Duddy’s condition of “an outbreak of violence and/or interruption of democracy”.

Clearly the paper raises the spectre that, as with the US-backed coup in 2002, the US could seek to blame any right wing opposition-led post election disruption on the Hugo Chavez government, with the US then taking the measures Duddy suggests.

The “options” suggested by Patrick Duddy’s, a former Bush era Deputy Assistant Secretary of State for Western Hemisphere Affairs, form part of ongoing hostilities to the democratically elected Chavez government from neo-cons in Washington. Connie Mack, chairman of the U.S. House Subcommittee on the Western Hemisphere, has openly advocated that Venezuela is added to the US lists of states that sponsor terrorism. Whilst Republican Presidential candidate Mitt Romney earlier this year attacked Venezuela during the US Presidential campaign as a threat to national security and accused Venezuela of "spreading dictatorships & tyranny throughout Latin America".

With less than one month to go until the Venezuelan people go to the polls, and with it looking likely that they will re-elect Hugo Chavez, solidarity in defence of the right of the people to choose their own government free from outside intervention clearly remains vital.