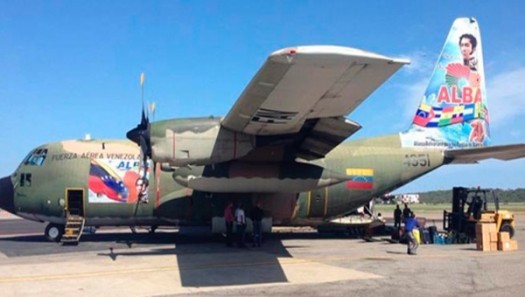 Hernandez referred to the action as "an act of intimidation, which is not a coincidence and it proves that Tel Aviv is trying to halt humanitarian aid, because right now Venezuela is an important beacon for the Palestinian people”.

In an open letter published yesterday in Cuban media, Fidel Castro praised Venezuelan president Nicolas Maduro for following up quickly on his promise to send aid to Palestine.

"It made me extraordinarily happy that he [Maduro] came through with his visit so soon, wrote Castro, “not only due to the honor that his presence implies and the prompt action, because of the very difficult task that it means to continue on with the epic battle of Hugo Chavez, but also because of the exceptional activities that he is carrying out with Palestine.

El Universal reported that Roni Kaplan, the spokesperson of the Israel Defense Forces, asserted that "there was no attack by the Israeli forces on the Egyptian side of Gaza. The air force has not attacked nor launched sound bombs to any humanitarian convoy on its way to Gaza from Egypt.”

Maduro has proven himself as staunch a supporter of Palestine as Chavez, recently opening a shelter for children orphaned by the conflict named after the late president. (A full image set of the shelter can be viewed on VA.com here).

This article in its original form may be found at www.telesurtv.net/english. Additional reporting contributed by venezuelanalysis.com.