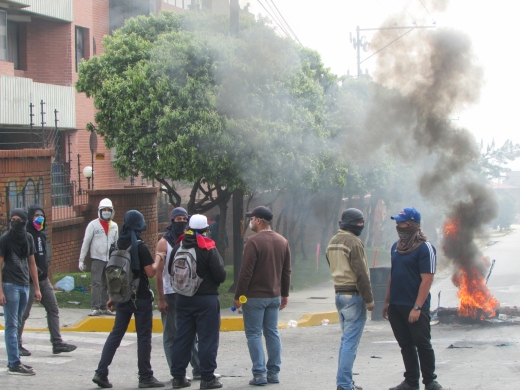 One person was reportedly killed by gunfire and four others injured in Ciudad Guayana, Bolivar state during street clashes. Two of the injured also sustained gunshot wounds, according to local media. Thousands of industrial workers had marched in support of the government through the city earlier today. According to a report from Ultimas Noticias, the deadly clashes occurred after "motorbike riders" tried to break an opposition barricade.

Student and model Genesis Carmona  has also died in a medical centre after being shot during clashes in the Carabobo state capital, Valencia.

An armed group also attacked Carabobo's headquarters of the government owned energy company Corpoelec earlier today. A captain of the National Guard (GNB) was hit by a bullet during the incident.

Another person was injured by gunfire yesterday when opposition groups attacked the Carabobo offices of the United Socialist Party of Venezuela (PSUV), according to Governor Francisco Ameliach.

“I call upon our membership to not fall into confrontation,” Ameliach stated yesterday.

Three others were injured yesterday when groups armed with Molotov cocktails attacked a government building in Tachira state. Security forces reportedly battled with opposition groups for around two hours.  The state's socialist governor Vielma Mora described opposition attacks in the state as a “low intensity war”. Mora stated that security forces in the state capital San Cristobal have been targeted by hit and run attacks from assailants firing from vehicles. Journalists are also being targeted by armed groups, according to Mora.

The governor also said there have been reports of armed groups charging toll fees at roadblocks around the state.

In Caracas one person was injured when opposition groups threw rocks at public transport last night. Transport minister Haiman El Troudi announced via Twitter that the incident prompted the cancellation of another bus route. Previously, on Monday seven bus routes were cancelled due to vandalism and opposition attacks.

In a meeting with transport workers today, the minister stated that sixty buses in Caracas have been attacked, and five in other parts of the country. El Troudi condemned the attacks, stating that the perpetrators are “looking to generate an ... escalation of unrest”.

Today the Caracas mayor Jorge Rodriguez announced that the government is developing a plan to rehabilitate public spaces damaged by recent opposition demonstrations.

State media have also reported that a sick elderly woman died in the early hours of the morning after her ambulance was impeded from accessing a nearby medical centre by an opposition roadblock. Luzmila Petit de Colina was 70 years old, and suffered from a chronic illness, according to Correo del Orinoco. Her daughter hosts a program on the state-owned channel VTV. Today communication minister Delcy Rodriguez expressed “solidarity” with Colina's family.

In Merida, opposition groups continued to erect barricades around the city. Eight demonstrators were arrested in the Andean city last night, according to El Universal. The right-wing newspaper reported that the demonstrators had been involved in "non violent protests" yesterday. Photographs circulating in local media show opposition groups manning roadblocks of burning garbage yesterday afternoon.

Speaking on the condition of anonymity, hard-line opposition demonstrators at one barricade told Venezuelanalysis's Ewan Robertson today that they are fighting a war of “attrition” against the government.

“Either we get tired first, or they get tired first,” said another. According to the demonstrator, the group's strategy is to block as many roads as possible “day and night”.

“There are two points of view. As the constitution orders, the government logically has to guarantee the free flow of transit. But the constitution also establishes that we have the right to protest,” he continued.

The demonstrators denied they have firearms, and blamed security forces and pro-government groups such as the Tupamaros of causing violence. Venezuelanalysis has previously observed opposition groups using small arms in Merida. The group spoken to by Venezuelanalysis today were visibly armed with  rocks and what appeared to be Molotov coacktails.

One of the demonstrators also explained that they have adopted a strategy of retreating when security forces arrive, only to return once the police or GNB leave the area.

“We retreat, if they pass firing, we throw stones. When they’ve gone we come out and block everything again. That’s how we’re going,” he stated.

An opposition group in the same area clashed with riot police later in the afternoon. When two personnel carriers arrived on the scene, demonstrators threw rocks at officers, before retreating up the road. They continued to hurl rocks as police cleared the road.