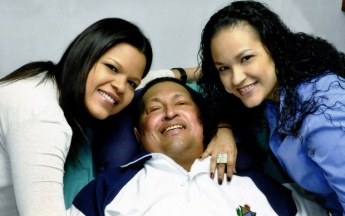 We are happy to report that president Hugo Chavez has today returned to Venezuela following his surgery in Cuba. We publish below a letter from Fidel Castro and send our solidarity wishes for his continued recovery.

I am extremely satisfied that you have been able to return to that piece of American land which you love so much, and to our brother people who support you so much.

A long and agonising wait, as well as your astonishing capacity for physical resistance and the total dedication of a team of doctors, as has been the case over the last 10 years, were necessary to achieve this objective.

It would be totally unfair not to mention the insurmountable dedication of your closest family members, your colleagues in the revolutionary leadership, the Bolivarian Armed Forces, who were re-armed and re-equipped by you, and the honest people of the world who have shown their support.

The breath the Venezuelan people offered you also deserves a special mention, who saluted you with their daily demonstrations of enthusiastic and unshakeable support. It is to this which your happy return to Venezuela is owed.

You learned a lot about life, Hugo, in those difficult days of suffering and sacrifice. Now that we will not have the privilege of receiving news of you on a daily basis, we will go back to the method of correspondence which we have used for many years.

We will always live to fight for justice for human beings, consciously and humbly, without fear of the years, months, days or hours that we might have left to live in the most critical era of the history of our humanity.

Our people, who are also your people, will know tomorrow of your return to Venezuelan via this message. Everything had to be done with much discretion, so as not to give an opportunity to the fascist groups to plan any of their cynical actions against the Bolivarian revolutionary process.

When the socialist camp collapsed and the USSR disintegrated, and imperialism with its sharpened knife tried to drown the Cuban Revolution in blood, Venezuela, a relatively small country in divided America, was capable of preventing that. Due to time restraints, I have not mentioned the numerous countries in the Antilles, Central and South America that Venezuela has helped, on top of its great economic and social programmes. That is why all honest people of the world have followed closely the “health and news of Chavez”.