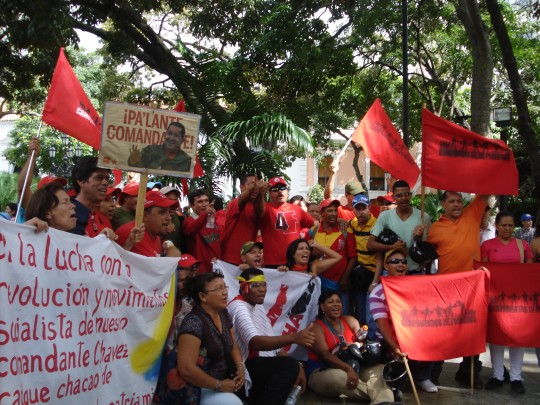 'Here, beyond the figure of one man, that which is important is the project to build a new society, an alternative to the capitalism which prevails today'

On 10 December 2012 Hugo Chavez was forced to return to Cuba for further cancer treatment as Cuban doctors informed him that  new malignant cells have appeared.

Our full solidarity goes out to President Chavez and the Bolivarian revolution in the hope he is able to make a full recovery.

Chavez was first diagnosed with cancer in June 2011, and successfully underwent treatment for a recurrence of the disease in February this year.

'It is this type of message that I never wanted to have to give to you, because it gives me a lot of pain that this causes hurt and distress to millions of you who have been formed into a single entity, because already Chavez is not this man, Chavez is a great collective, Chavez is the heart of the people and the people are here in the heart of Chavez. '

'We now have our homeland, Venezuela is not the same as 20 years ago, we have a people, the armed forces, national unity. If anything, I must insist that the new battle is to strengthen national unity in all the popular forces, in all revolutionary forces, the unity of all the Armed Forces, Army, Navy. I say this because the opposition, the country's enemies do not rest in trying to divide us, and especially exploit circumstances like this. What is our response?: Unity, unity, unity! That should be our motto'

According to the Venezuelan constitution, article 234, temporary absences of the president are substituted by the vice-president for up to 90 days, a period which is renewable by the national assembly. If something serious happens to the president, obliging him or her to abandon his or her position within the first four years of the six year term, new elections must be held.

Chavez’s new term begins on 10 January, and elections would be called within 30 days, were something happen to cause him to leave office.Chavez stated his confidence in the ability of Vice-president Nicolas Maduro stating

'My opinion firm, full and irrevocable, absolute, total, is that in a scenario where we were forced to  presidential elections, you would elect Nicolas Maduro as President of the Bolivarian Republic of Venezuela'. Nicolas Maduro is widely renowned for the political role he has played throughout the Bolivarian Revolution, Nicolas Maduro, who been the country’s foreign minister since 2006. A former union leader of the Caracas metro workers union, Maduro was also a founding member of the Fifth Republic Movement, which drove Chavez's first presidential election victory of 1998.

Despite the inevitable media spin and propaganda surrounding the immediate future of Venezuela, as Rafael Ramos activist of the youth wing of Venezuela's United Socialist Party, informed the Revolutionary Communist Group 'Here, beyond the figure of one man, that which is important is the project to build a new society, an alternative to the capitalism which prevails today, the important issue is that this is a project of social change, this socialist project that is being created and promoted from Venezuela, is an open window providing us a glimmer of hope for humanity.'