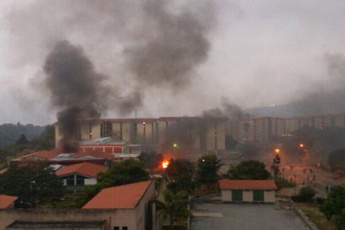 Millions of dollars worth of damages to public property may have been caused by a wave of violence across Venezuela, according to government sources.

The total price tag of public damages could have already topped Bs10 million, the minister for science and technology Manuel Fernandez stated on Monday. He pointed to a spate of attacks on public property over the weekend for raising earlier estimates.

“In [the Caracas neighbourhood of] Altamira they attacked a radio station, in Maracaibo they attacked two trucks full of cell phones, a telephone exchange in Barquisimeto, and an administrative office and a commercial operator,” Fernandez stated. A worker installing lines for the state-owned telecommunications company CANTV was also attacked on the job, according to the minister.

Bs10 million is US$1.6 million at the official exchange rate. However, Fernandez didn't rule out the possibility of the cost of damages continuing to rise.

On Tuesday, the government announced that Bs7.5 million of public funds had been set aside to repair infrastructure in Caracas.

Along with at least 12 deaths and hundreds of injured, public buildings and government-run missions have been hit during opposition demonstrations and street clashes. Many of Venezuela's major cities are also pock-marked with scarred patches of road where barricades were erected and often set on fire.

When demonstrations first broke out nationally on 12 February, violent opposition groups attacked the attorney general's office in Carabobo Park, Caracas. Photographs of the scene showed the building's exterior was damaged. A building belonging to the government owned Fundacaracas organisation was also attacked by opposition groups that day.

Since then offices of the state-owned energy company Corpoelec has been targeted in Carabobo, while government offices have been attacked in Tachira. This isn't the first time the energy provider has come under attack. On 12 February electric substation in Tachira's capital of San Cristobal was hit with molotov cocktails. According to energy minister Jesse Chacon, Corpoelec assets have also been vandalised in Anzoategui and Bolivar states.

Public health services have become another casualty of the violence, with government run medical clinics being struck across the country. The widespread attacks have curtailed access to healthcare nationwide, according to the minister for health Francisco Armada. Speaking to state media on Monday, Armada described the attacks as “absurd, contradictory and senseless”, stating the slew of attacks appear to be aimed at Cuban medical workers.

Armada also stated that the disturbances have also taken a toll on the distribution of medicine. “We have been strengthening distribution systems, however, in some cases...medicine distribution has been limited thanks to recent protests,” he said.

State media have also come under attack. Over the last two weeks the headquarters of public broadcaster VTV have been repeatedly vandalised.

State-run food programmes Mercal and Pdval have also been hit, with vehicles belonging to the two organisations being torched over the weekend. Last week five vehicles belonging to CANTV were set ablaze in Barquisimeto, Lara state. Public transport has also reportedly become another target for anti-government groups, with at least 40 metropolitan buses being vandalised during the wave of violence. A handful of bus routes in the capital of Caracas have been suspended, including around the affluent areas of Chacao and Altamira.

“Terrorism” in the Andes

The environmental ministry has also reported that its offices in Merida were besieged on Monday. According to a press release from the ministry, “masked men” attacked the offices. Five vehicles were damaged and the offices were “ransacked”, according to the ministry.

Environment minister Miguel Leonardo Rodriguez has described the attack as “terrorism”. “Throughout the afternoon and evening these groups besieged our offices in Merida, causing environmental damage and fires,” he stated.

Businesses have likewise suffered, with almost daily reports of stores being ransacked. Yesterday Merida's police force reported that an upmarket shopping centre had been assaulted by an armed group. When police arrived they were met with gunfire, and temporarily impeded from accessing the shopping centre by rows of barricades. However, demonstrations remain the most intense in Tachira, where this week retail stores, a supermarket, dance club and other businesses have been looted.

Over the weekend footage that proportionately shows an attack on a community television station in Tachira also emerged. The video appears to show two masked figures douse the building in fuel and set it alight on 19 February.