Published on 5 January 2016 by www.venezuelanalysis.com 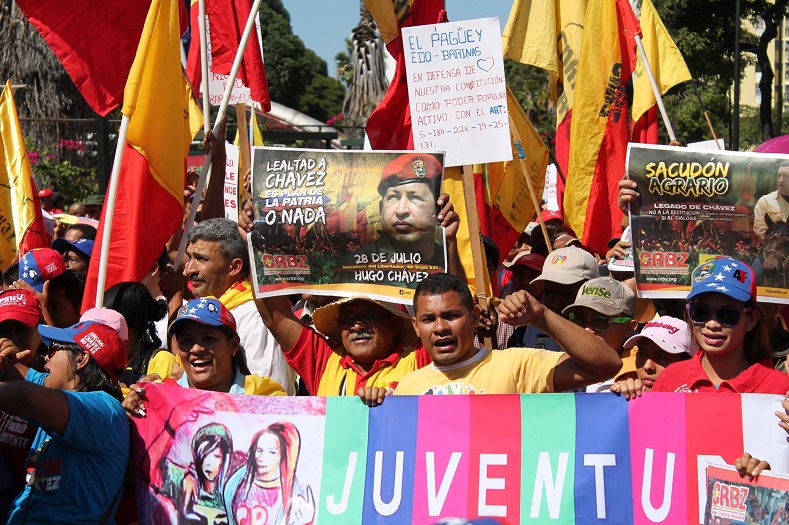 Venezuela’s National Assembly for the 2016-2021 term was sworn in today at 11 AM, in a ceremony that marked a new political era for the legislative body. Two-thirds of the incoming legislators belong to the country’s rightwing opposition.

At the start of the ceremony, Henry Ramos Allup was sworn in as National Assembly president. A key figure from the country’s neoliberal era that preceded Hugo Chavez and leader of the former governing party Democratic Action, Allup reiterated his determination today to find opposition unty on a procedure for “the exit” of the Maduro government within six months.

Led by former Assembly president Diosdado Cabello, 54 members of the United Socialist Party (PSUV) walked out in protest over a violation of the parliamentary procedures, which stipulate that the only topic of today's first session would be the election of the National Assembly leadership. Contrary to this rule, opposition lawmaker Julio Borges, who leads the opposition faction in parliament, had presented his faction's legislative plan for the coming year.

“We are 54 legislators of the country who are prepared to defend the Venezuelan people,” PSUV legislator Diosdado Cabello told press outside the assembly.

“We left because we made a formal complaint … that went ignored,” he added.

Lopez turned himself in for arrest in February of 2014, and was accused of inciting violent street protest and calling for the removal of the democratically elected president, Nicolas Maduro.

From images tweeted by news broadcaster TeleSUR, it appeared that the lawmakers removed the portraits of late socialist leader Chavez and 19th century revolutionary Simon Bolivar that previously hung on either side of the plenary chamber.

Tensions between the two political sectors were exacerbated at the end of December after the Supreme Court suspended the swearing in of four incoming legislators on Wednesday pending investigations of voting irregularities in Amazonas state.

Shortly after his taking the Assembly's presidency, Allup swore in 163 of the 167 newly elected representatives. He was not able to include the four legislators in question because a parliamentary commission had refused to recognize their credentials due to the earlier Supreme Court ruling against their election.

Throughout the morning, thousands of supporters from both political sectors marched outside the Parliamentary building, while hosts of police and National Guard prevented tensions from boiling over.

The PSUV legislators who walked out joined the crowd of supporters shortly afterwards, reiterating their steadfast support for the people and the socialist government.

Meanwhile, inside the building, where only opposition representative continued to meet, Julio Borges declared that the opposition's top legislative project includes the passing of  law amnesty for "political prisoners" (opposition members accused of fomenting violence).