Published  on 4 November 2015 by Telesur English 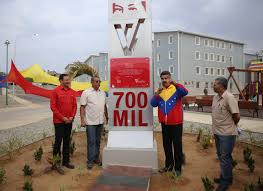 Venezuelan President Nicolas Maduro has bet his iconic mustache that the government will meet its target of completing the construction of a million new homes by 2016.

“I'll make a bet: if by December 31 we do not reach one million new homes I will shave off my mustache,” said the president during his weekly Tuesday speech broadcast on local media.

The plan to build a million new homes by the end of 2015 is part of the Great Housing Mission Venezuela, which was an initiative started by late President Hugo Chavez in 2011. The plan was to build thousands of homes that would be 80 percent subsidized by the government for families living in poverty.

As of Oct. 14, Venezuela had created 742,510 homes, said Minister of Habitat and Housing Manuel Quevedo. That same month, the minister announced it would prioritize the housing mission and double the number of workers dedicated to building new homes for the homeless. The official also said that in the first 10 months of the year, 100,000 homes had been built. In January the ministry put the number of completed housing units at just under 676,000, suggesting the government is building an average of more than 200 units each day

Maduro then called on construction workers to help him win the bet, saying he did not want to lose his ‘stache.

“I tell my brothers and sisters, the men and women construction workers and engineers: Work so that I do not have to cut my mustache! No it's a lie. I'm kidding. Work because our people need to have their homes,” he said.