Published on 31 October by Telesur English 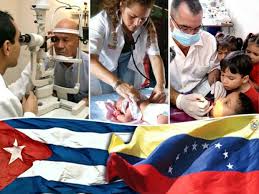 "It's the largest and most powerful humanitarian mission ever conceived in Venezuela – perhaps in the world,” Maduro said, referring to Barrio Adentro (Inside the Neighborhood). The program provides free healthcare to the public, with a focus on aiding poor and rural regions.

Celebrating the 15th anniversary of a bilateral agreement with Cuba that led to the creation of Barrio Adentro, Maduro said the health program has provided over 731 million consultations. This means on average, the mission is helping over 6000 people an hour.

Just under 2 million surgical procedures have been conducted by Barrio Adentro, and over 1 million Venezuelans have been treated for vision problems by another health initiative, Mission Milagro (Miracle Mission).

Overall, Barrio Adentro has now directly provided care to two thirds of Venezuela's population of 30 million, according to official figures.

When Barrio Adentro was founded in 2003, close to half of Venezuelans lived in poverty and many lacked access to basic health care.

The poor were the worst affected by the rollback of public health services in the early 1990s, when the neoliberal government of President Rafael Caldera slashed public spending and privatized health care assets – leading to prices for even basic care skyrocketing. Remaining public services saw people lining up for sometimes days to receive treatment.

Under President Hugo Chavez (in office from 1999 to 2013), Barrio Adentro was established with the initial goal of restoring access to basic health care for those who had been most impacted by Caldera's reforms – both the urban poor, and Venezuelans living in remote areas. In its first three years of operation, nearly 3,000 Barrio Adentro clinics were built. Most of these were concentrated in slums, working class neighborhoods, rural areas, and other disadvantaged communities.

These basic clinics are just the tip of the iceberg. Over the past decade, the government has launched a total of four phases of the Barrio Adentro mission. Each phase has provided Venezuelans with a new layer of health care. The Barrio Adentro II network offers secondary level care, including treatment for serious illnesses and care for those with disabilities. Most Barrio Adentro II facilities look and feel much like a regular hospital, though they are often located in the poorest areas of Venezuela. So far, there are 1,170 Barrio Adentro II sites nationwide. For health issues requiring specialized treatment beyond the capacity of the first two stages of the mission, there are Barrio Adentro III and IV.