The incursion of paramilitaries into Venezuela. A silent and dangerous invasion 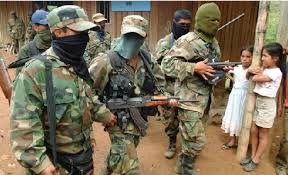 The paramilitary groups act as a mercenaries cells, paid by landowners or governments that promote terrorism, paramilitarism in Venezuela. They began acting at the frontier of Tachira, Apure and Zulia, in cattle rustling, kidnapping, extortion and killings. Proof of this has been the number of peasants killed by hired killers with land problems by paramilitary groups.

All these events are not accidental, behind these events is the hand of Santander Uribe Velez (Ex Colombian president) and his family, one of the creators of such mercenaries or paramilitaries in his country, there are also the seven US bases in Colombia, besides US embassies in Colombia and Venezuela and the stateless fascist bourgeoisie, who just want the rule of the jackboot be installed here.

They are using the paramilitaries to destabilize the country, the  electricity service, the universities and economic sector, to convulse large cities with guarimbas and killings of leaders.

Venezuela has denounced the presence of extreme right paramilitary groups of the in its territory. These groups, coming from Colombia, are pursuing well-defined political and economic objectives.

Three cases of murder with extreme violence caused fear and outrage in the Venezuelan population: The Bolivarian government research found links with para militarism and even the Colombian Goverment hiring of professional killers in the border area as well as use of internal political criminal elements linked to the killing of the youngest elected member of Parliament, Robert Serra and his fiance and the murder of Eliezer Otaiza who was alderman in the munipality of Libertador in Caracas

At the same time it has become clear that  through these crimes what is sought was the weakening of the Bolivarian Revolution.

Exactly two years ago Venezuela presented a report to the Secretary of State of the United States, John Kerry, on the conspiratorial acts against the welfare of the country executed by three diplomats from the US government in Caracas.

In this report it was explained that Kelly Keiderling, Elizabeth Hunderland and David Mutt held meetings with opposition sectors of Amazonas and Bolivar linked to destabilization plans put in place both in the basic industries of the region, including the promotion of street protests, undermining of government decisions and the promotion of indigenous rebellions.This fact merited the expulsion of these three officials of the US embassy in Caracas.

These actions have connection with the plan 'Total collapse', denounced in recent days by President Nicolas Maduro as providing for the destabilization of the Bolivarian Revolution and Venezuelan democracy. It is a great psychological operation with concrete expressions taken directly by these officials of the US Embassy.

President Nicolas Maduro has used an iron fist to defend the homeland at the whatever expense. Venezuela and Colombia share 2,219 km of land border, one of the largest and most populous of South America. The daily crossings from side to side, through the legal procedures and dozens of trails, is intense.

This situation has led to the lack of control of both Colombian and Venezuelan authorities, in an environment conducive to illegality, which imperialism takes advantage of in order to defeat the Bolivarian revolution.