The truths that begin to surface about Alan Gross 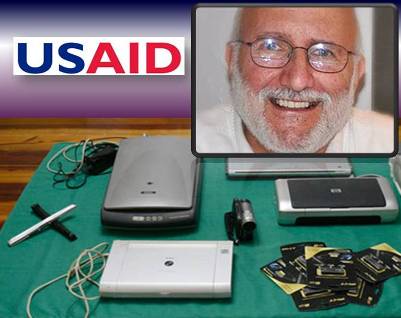 It seems that some major media in the United States, so tightly controlled by the powers of the "Establishment", have timidly begun to tell the truth about somesensitive issues regarding relations with Cuba prior to December 17, 2014.

Thus, under the title "The real story behind the work of Alan Gross in Cuba, "JohnStoehr, editor of The Washington Spectator and contributor to The Hill ofWashington, DC, offers a version different from the official –and the only one USreaders had– about the activities of the US agent which prompted his arrest,conviction and imprisonment in Cuba.

“If you didn’t know anything about Alan Gross other than what you saw on television, you probably thought it was appropriate for him to sit next to First Lady Michelle Obama as a guest of honor at this year’s State of the Union address,” said Stoehr .

Of Gross it was only said that he was a humanitarian activist unjustly jailed in 2009 by a repressive Communist regime for the alleged crime of promoting internet access to Cuba’s small Jewish community.

According to The Spectator, even after his release from prison and return to the United States in December as part of President Obama’s plan to normalize diplomatic relations with Cuba after half a century of regime-change policy in the United States, the official narrative with bi-partisan support exonerated him from guilt.

Nothing had been said about the fact that in 2009, the United States Agency for International Development (USAID) paid Alan Gross, through a third party specialized in installing computer electronics in remote areas, almost $600,000 to go to the island nation to install military-grade internet equipment in Jewish synagogues which could not be detected by the government in Havana.

According to the Government Accountability Office (GAO), the United States government has spent more than $200 million since 1996 on so-called “democracy-promotion programs” meant to destabilize the Cuban government from the inside.

“The GAO report noted that Cuban law forbids citizens from working with “U.S. democracy promotion activities.” Therefore, of necessity, any pro-democracy program could not have been conducted openly. But American law forbids the State Department, which oversees USAID, to engage in covert operations. For this reason, USAID always says its Cuba programs are not “covert” but rather “discreet.” Gross was, however, not discreet enough,” Stoehr comments ironically.

On his fifth trip to Cuba, in 2009, Gross was detained and later sentenced to 15 years for “criminal acts against the independence of the Cuban nation.”

“Gross wasn’t only paid hundreds of thousands of dollars to subvert the Cuban government; he understood that by installing banned internet networks, he was breaking Cuban law. “This is very risky business in no uncertain terms,” Gross wrote in trip reports to AP’s Desmond Butler. Once Gross said, “we are all ‘playing with fire.’”

Development Assistance Inc., the third-party company that subcontracted with Alan Gross, said he remitted regular reports of his activities. DAI said that it briefed USAID on everything Gross was doing. A spokesman for DAI told the Associated Press in a statement that Gross “designed, proposed, and implemented this work”

Gross was endangering American and Cuban Jews when they were smuggling secret high tech components like “subscriber identity modules,” or SIM cards available only to military and intelligence agencies.

Gross used the Jewish community for cover and thus endangered the privileges Jews enjoy in Cuba, according to the Spectator. “Cuban Jews had access to the internet for years before Gross started working with them.”

Yet after being arrested, Gross claimed he had no idea that what he was doing was illegal in Cuba, that he had no intention of undermining the government, that the company that hired him, DAI, failed to properly inform him of the risks. At his trial, he said that he was “deeply sorry for being a trusting fool. I was duped. I was used.”

But he was also enriched. While Alan Gross was serving his prison sentence, his wife, Judy Gross, sued DAI for $60 million in federal court. The company settled nearly two years ago for an undisclosed sum. Whatever the amount, it’s in addition to $3.2 million that USAID agreed to pay Gross and DAI in November before he was released.