Published on 16 January 2015 by TeleSUR English 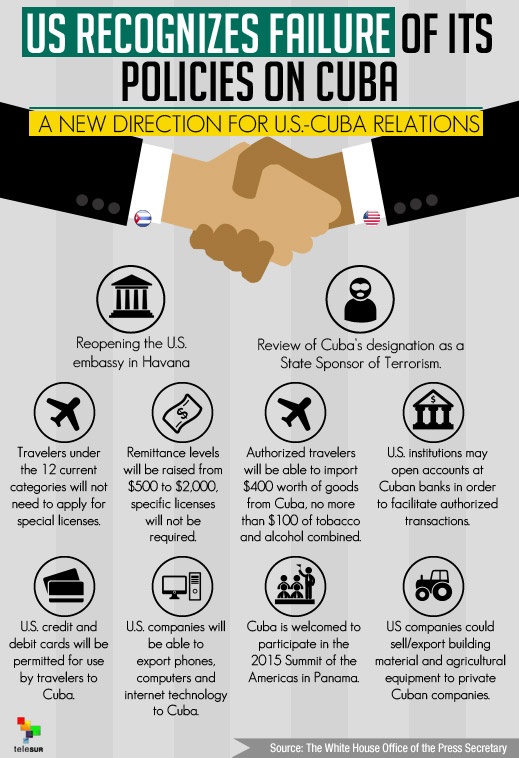 The U.S. government lifted large portions of its blockade against Cuba Friday, significantly loosening restrictions on American trade and investment. The U.S. Treasury Department announced Thursday modifications to trade limitations with Cuba and the travel restrictions to the island for U.S. citizens.

Cuba–U.S. relations took a historic turn on Dec. 17, when three Cuban political prisoners — unjustly held by the United States for more than 15 years — were released, and the White House announced numerous policy shifts toward the Caribbean nation. President Barack Obama admitted that his country's half-century attempt to defeat Cuba had failed.

United Airlines said Thursday it planned to serve Cuba from Houston, Texas, and Newark, New Jersey, subject to government approvals. Delta Air Lines and JetBlue Airways said they would also look into adding services. Leading online travel company Orbitz Worldwide welcomed the Department of the Treasury's amendments to the Cuban Assets Control Regulations, which will facilitate travel to Cuba for authorized purposes and facilitate the provision by travel agents and airlines of authorized travel services.

Robert Muse, a Washington-based lawyer and expert on Cuban legal issues, told Voice of America that hefty fines remain for those involved in unauthorized travel.

“It is US$100,000 per infraction. So if you have 20 people in a group traveling to Cuba and the organizers violated the rules, you are looking at a US$2 million penalty,” he said.

Meanwhile, the details of the new amendments provide opportunities for U.S. businesses to export certain goods to Cuba, including telecommunications equipment and building materials for private residents and small businesses.

Senior administration officials plan to travel to Cuba later this month to discuss additional migration issues, as well the logistical considerations surrounding the reopening of the U.S. Embassy in Cuba.

Only the U.S. Congress can lift the blockade that has been in place since 1960. However, several U.S. lawmakers have vowed to block any attempts to restore diplomatic relations.

The United States is home to over 2 million Cubans.