The New York Times Admits US Interference in Cuba

Published on 10 November by Prensa Latina 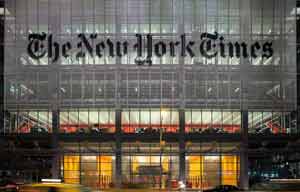 For the fifth time in less than a month, The New York Times published a long editorial on Cuba, in which it listed the countless destabilizing efforts by the United States to overthrow the Cuban government.

In an article entitled "In Cuba, Misadventures in Regime Change", the Editorial Committee of the influential New York-based newspaper on Sunday reviewed Washington's countless plans against national stability in Cuba since the approval of the Helms-Burton Act in 1996 to date.

The New York Times notes that these subversive plans only served as the foundation for the US government to spend 264 million dollars over the past 18 years, in an effort to instigate alleged democratic reforms on the island.

The newspaper admits that far from having achieved their goals, the initiatives were counterproductive, as those funds "have been a magnet for charlatans, swindlers and good intentions gone awry".

"The stealthy programs have increased hostility between the two nations, provided Cuba with a trove of propaganda fodder and stymied opportunities to cooperate in areas of mutual interest," adds the newspaper.

It accuses the US Agency for International Development (USAID) of carrying out cloak-and-dagger missions to implement illegal projects in Cuba.

The editorial notes how "spending on initiatives to oust the government surged from a few million a year to more than $20 million in 2004", during the first years of the George W. Bush administration (2001-2009), when "most contracts were awarded, without much oversight, to newly formed Cuban-American groups".

The New York Times explains how one of those groups invested the money "on a legally questionable global lobbying effort to persuade foreign governments to support America's unpopular embargo" (blockade), which the United State has imposed on Cuba since 1962.

Another group sent loads of comic books to the American diplomatic mission in Havana, bewildering officials there, says the newspaper, adding that "the money was also used to buy food and clothes, but there was no way to track how much reached relatives of political prisoners, the intended recipients".

According to a report published in November 2006 by the Government Accountability Office (GAO), "one contractor used the pro-democracy money to buy 'a gas chain saw, computer gaming equipment and software (including Nintendo Game Boys and Sony PlayStations), a mountain bike, leather coats, cashmere sweaters, crab meat and Godiva chocolates,' purchases he was unable to justify to auditors."

The New York Times adds that despite the results of the GAO probe in 2006, Congress appropriated $45 million for the programs, a record amount, in 2008.

"In December 2009, Cuban authorities arrested an American subcontractor who traveled to the island five times on USAID business, posing as a tourist to smuggle communication equipment," notes the newspaper.

After that, "senior officials at USAID and the State Department were startled by the risks being taken, and some argued that the covert programs were counterproductive and should be stopped. But Cuban-American lawmakers fought vigorously to keep them alive", says the editorial.

"After Mr. Gross's arrest, the aid agency stopped sending American contractors into Cuba, but it allowed its contractors to recruit Latin Americans for secret missions that were sometimes detected by the Cuban intelligence services."

The newspaper recalls that "an investigation by The Associated Press published in April revealed a controversial program carried out during the Obama administration. Between 2009 and 2012, Creative Associates International, a Washington firm, built a rudimentary text messaging system similar to Twitter, known as ZunZuneo, Cuban slang for a hummingbird's tweet."

"A second AP report revealed in August that USAID had been sending young Latin Americans to Cuba to identify 'potential social change actors,' under the pretext of organizing gatherings like an HIV prevention workshop," points out The New York Times.

The editorial notes that instead of stealth efforts to overthrow the government, American policy makers should find ways through coordination with the Cuban government.

"Washington should recognize that the most it can hope to accomplish is to positively influence Cuba's evolution toward a more open society. That is more likely to come about through stronger diplomatic relations than subterfuge," concludes The New York Times.