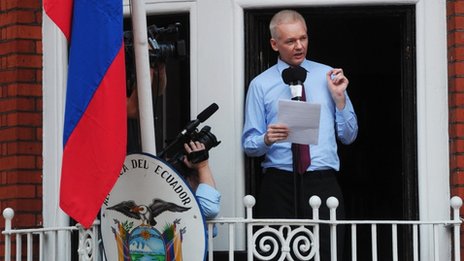 The decision by Ecuador’s President Correa on 16 August to offer diplomatic asylum to Wikileaks founder Julian Assange exposes sharply the moral and political chasm on human rights between, on the one hand, the progressive socialist government of Ecuador and its allies in the Bolivarian Alliance of the Americas (ALBA), and on the other, the corrupt and vicious British state.

The high-handed threat by British Foreign Secretary William Hague that the UK has a legal basis, under the Diplomatic and Consular Premises Act 1987, to enter the Ecuadorean Embassy and arrest Assange, has provoked fury throughout Latin America. ‘We are not a colony!’ stated Ecuadorean Foreign Minister Ricardo Patino and described the British threats as ‘unacceptable and a menace to all the countries of the world’.

Fighting extradition
Assange sought refuge in Ecuador’s London embassy two months ago, after exhausting all legal appeals against extradition to Sweden for questioning on allegations of rape. He fears that being sent to Sweden would be simply a prelude to extradition to the United States, where his lawyers suspect he has already been secretly indicted by a Grand Jury on espionage charges. As editor in chief of Wikileaks, Assange has been responsible for the publication of thousands of documents and cables from US and other government sources, revealing damning evidence of imperialist crimes. These include the publishing of videos of US slaughter of civilians in Iraq and Afghanistan, and evidence of the systematic use of torture as government policy. The US does not forgive easily the exposure of its brutal practices – witness the two years spent in solitary confinement and conditions of near torture by Private Bradley Manning, the young soldier accused of leaking many of the original documents. There are many in the US who have called for Assange to face the death penalty for ‘endangering the lives of American soldiers’.

He has every reason to mistrust Sweden, a US ally with up to 1,000 troops in Afghanistan, which, despite bringing no charges against Assange, has said that he will be held in detention if extradited. Why have the Swedish authorities refused repeated offers by Assange to be questioned by them, originally at the Swedish Embassy and now at the Embassy of Ecuador, as a swift and easy way of resolving the dispute? Sweden has refused to give the commitment sought by Ecuador that, if extradited, Assange will not face extradition to a third country.

Resisting imperialist threats
Ecuador has taken a courageous and principled stand in offering Julian Assange diplomatic asylum and will undoubtedly face a vicious response from both the US – which currently takes 45% of Ecuadoran exports on preferential terms – and from Britain. But its own history has taught it not to trust US imperialism. During the 1960s, the CIA spared no effort to bring down the country’s elected government, bombing churches and blaming it on ‘left-wing forces’, and deliberately provoking and then supporting the 1963 military coup. It was not until 2006, with the election of Rafael Correa, that Ecuador was able to finally break with imperialist domination of the country and begin to tackle endemic inequality, poverty and disease – despite a failed US-backed coup attempt in 2010. Correa has committed Ecuador to building ‘socialism for the 21st century’. Alongside him stand the ALBA countries, led by socialist Cuba, Venezuela and Bolivia, which have uncompromisingly rejected what they call ‘British threats on the integrity of the Ecuadoran Embassy in London’. The Organisation of American States, with the unsurprising exceptions of the US, Canada and Trinidad & Tobago, have also reiterated support for the ‘inviolability’ of Ecuadoran diplomatic space.

Even following the 1973 military coup in Chile, when hundreds of Chileans sought refuge in many different embassies in the capital Santiago, the Pinochet dictatorship did not threaten to enter any of them. Nor did it intercept anyone offered asylum in their journey to the airport and into exile.

In contrast, Britain has threatened to storm the Ecuadorian embassy, refused to offer Assange safe passage to Ecuador, and has made it clear it will arrest him if he steps outside the building. On the night of 15 August, in a clearly threatening move, police officers entered the surrounding area, perhaps with the intention of a quick and secret grab; in a statement made on 19 August, Assange told supporters who have held constant demonstrations outside the building:

‘Inside this embassy after dark, I could hear teams of police swarming up into the building through its internal fire escape. But I knew there would be witnesses and that is because of you. If the UK did not throw away the Vienna Conventions the other night it is because the world was watching and the world was watching because you were watching.’

As ever, ‘human rights’ remain a flag of convenience for countries like Britain, to be waved hypocritically as a cover for war against Iraq, Afghanistan and Libya, whilst they brutally censor, persecute and repress those who expose the crimes against humanity committed by imperialism. In his statement, Assange called for an end to the ‘war on whistleblowers’ being waged by the Obama administration in the United States, and in particular singled out detainee Bradley Manning, adding:

‘If Bradley Manning did as he is accused, he is a hero and an example to us all and one of the world’s foremost political prisoners. Bradley Manning must be released.’
He paid tribute to all the countries of Latin America, their governments and their people, who have defended the right to diplomatic asylum, the right to protest, and the right to tell the truth.

Defend the inviolability of Ecuador’s embassy!