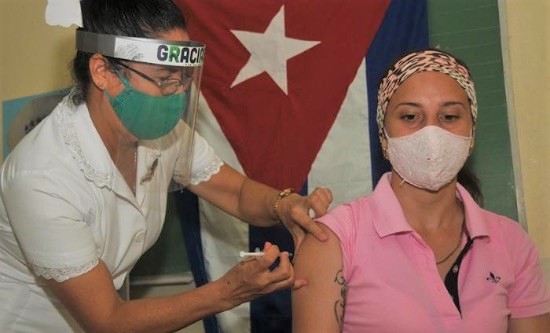 ‘Cuba has developed different RBD-based public vaccines, the most administered worldwide (protein-based), and among them the only SARS-CoV-2 conjugate-vaccine (RBD-TT), designed especially for children.’

Following clinical trials carried out over the summer, on 3 September 2021, Cuba’s national medical regulatory body (CEMED) authorised emergency use of the Finlay Institute’s Soberana vaccines for children from 2 to 18 years old.2  Cuba has now become the first country in the world to roll out Covid-19 vaccines for children as young as two, and among the few countries worldwide to be vaccinating under 12-year-olds. The clinical trials showed: ‘After two doses of Soberana02, 99.3% of 3-11 year-old children and 92.9% of 12-18 year-old children had an antibody response that was 4 times the pre-vaccination level’ – a superior response to that of adults.3

Unlike Pfizer and Moderna, whose Covid-19 vaccines are based on new (mRNA) technology, all of Cuba’s five domestically produced vaccines are based on technology that has been used with children for decades. Back in 1988, Cuba’s Finlay Institute developed the world’s first Meningitis B vaccine, after an epidemic which particularly affected children. Soberana 2 increases immunogenicity and induces immunological memory. Children are being given two doses of Soberana 2 and a third of Soberana Plus at 28-day intervals. Cuban schools will not reopen until children have been vaccinated. By mid-September, 460,000 Cuban children and adolescents (20%) had received a first dose.

Soberana 2 and Soberana Plus are two of the five vaccine candidates developed so far by Cuban medical scientists. Soberana Plus was designed to protect Covid-19 convalescents (those already infected) from reinfection. A paper in The Lancet medical journal concludes that a ‘single dose of the [Soberana Plus] vaccine against SARS-CoV-2 was an efficient booster of pre-existing natural immunity, with excellent safety profile’.4

Cuban vaccine Abdala, produced by the Centre for Genetic Engineering and Biotechnology (CIGB), is also being rolled out nationwide; it has an efficacy of 92.28%. Soberana 1 and Mambisa are still passing through clinical trials. Cuba’s Ministry of Public Health (MINSAP) is delivering 150,000 to 200,000 doses daily. By 17 September, 39% of the population (11.2 million) were fully vaccinated, with three doses, and 66% had received at least one dose. Talks have started with the WHO about listing the Cuban vaccines for emergency use worldwide. On 18 September, Vietnam approved Abdala for its population.

The rapid vaccine rollout is essential to arrest the alarming surge of Covid-19 cases in Cuba, initially since January 2021 but soaring as the Beta variant took hold in spring, followed by the highly contagious Delta variant into the summer. The rollout of Soberana 2 was delayed due to difficulties obtaining raw materials for industrial production – a direct result of US sanctions. The US blockade, which has been tightened, has imposed multiple obstacles on Cuba’s response to the pandemic. For example, in early 2020, the island could not purchase medical ventilators for its ICU units nor spare parts for its existing machines and in 2021 it has been unable to purchase syringes and other medical equipment for the vaccination rollout. Millions of syringes have been donated by solidarity activists around the world, including millions from the United States.

This summer, Cuba’s infection rates have been among the highest in the western hemisphere, although its Covid-19 fatality rate has remained well below the world and regional averages. In mid-September it was 0.85% compared to 1.8% in Britain and 1.6% in the United States. With the vaccine rollout delayed, cases surged out of control in Matanzas and local health services were overwhelmed. The fatalities were devastating; but they were exploited from outside by entities and individuals financed with US Congress-approved dollars who are employed in the social media war on Cuba. As reported in the last issue of FRFI: ‘On 15 June, the hashtag #SOSCuba was launched by a US company, the same day it was authorised to receive Florida state funding; on 5 July, hashtags appeared calling for a “humanitarian corridor” in Cuba’. The hashtag #SOSMatanzas was promoted to urge an anxious population onto the streets in protest and to call for foreign intervention in Cuba. These machinations were behind the 11 July protests (see FRFI 283).

During August infection rates remained stubbornly high, generating shortages of critical care beds in areas experiencing a surge. President Díaz-Canel told officials that the pandemic ‘had exceeded the capacities of the health system, placing stress on the work of all its personnel, of all the organisations that are supporting the confrontation with the pandemic’. To compound Cuba’s woes, the main plant producing medical oxygen broke down. Cuba’s access to both the foreign exchange and the spare parts necessary for maintenance is obstructed by the US blockade. The Russian government donated a new oxygen plant, and China shipped high performing lung ventilators and oxygen concentrators. UNICEF also donated a medicinal oxygen plant to Cuba. Mexico, Venezuela and other countries in Latin America also sent assistance, including foodstuffs, essentials in short supply as a result of US sanctions imposed to asphyxiate the Cuban people. The oxygen plant was restored by 4 September.

Also in early September, MINSAP announced that two doses of China’s Sinopharm vaccine would be given to the population of Cienfuegos, a province with some of the highest infection rates nationwide, with a third dose of Soberana Plus. By 21 September, total Covid-19 deaths in Cuba were 6,978 and daily Covid cases and fatalities were finally beginning to decline. This is vital for a country that prioritises human welfare but is also obliged to reopen the economy to avoid more acute shortages and greater suffering.

The aim is to have 90% of the population fully vaccinated by December. From mid-November, the island will gradually re-open for tourism, guided by epidemiological indicators in each province. Cuba’s main tourists are from countries with high vaccination rates: Canada, France, Britain, Germany and Spain. Tourists will require a vaccination certificate or, if unvaccinated, a negative PCR test result within 72 hours of arrival. While relaxing its stringent hygiene-health protocols, Cuba will focus on symptomatic patients, temperature monitoring and random testing. Visitors who test positive will be transferred to a hotel-hospital tourist facility for isolation and medical care.

More than 75% of the purchases made for the tourism sectors are from national industries, so this should boost domestic production. During the pandemic, over half of Cuba’s 111,000 tourism workers remained actively engaged, with many reassigned to work in hotels designated as paediatric and maternity hospitals, and other centres.

2021 has been tough for Cuba, with the enduring impact of the Trump administration sanctions, reinforced by Biden who imposed new sanctions on 30 July, and the pandemic. The global public health crisis has undermined the state’s capacity to circumvent the US blockade, which almost the entire world opposes. However, by the end of the year the island will be among the first countries in the world to fully vaccinate its population, and that means the domestic scenario should improve.