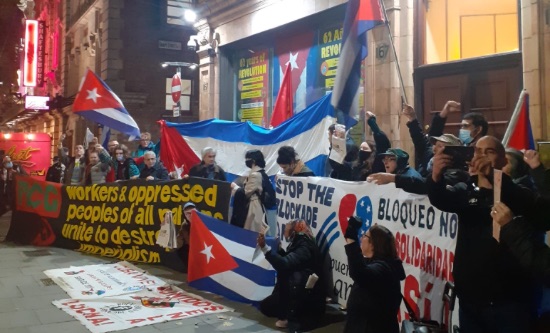 Since the ‘spontaneous’ coordinated counter­revolutionary protests in Cuba in July, the United States (US) has stepped up its attempts to overthrow the Cuban Revolution. The Biden administration has introduced new measures to intensify the blockade and has allotted $20m funding for regime change in Cuba. The US’s latest stunt was orchestrating a new wave of protests to take place in Cuba on 15 November. Despite their best efforts, the protests amounted to very little. RIA AIBHILIN reports.

The US was desperately counting on the 15 November protests to do what it has been unable to do for 62 years: to manufacture internal opposition in Cuba and provoke destabilisation leading to the restoration of capitalism on the island. Between 22 September and 15 November there were over 180 statements from US figures and government officials whipping up public support for intervention in Cuba. Bots churned out Tweets every second and used the #15N hashtag to promote the protests. We were promised mass anti-government street action.

The plans were fronted by Cuban artist Yunior Garcia through his ‘Archipielago’ group created after the July protests. Garcia’s insistence that he was a representative of genuine frustration within Cuba was rubbished when his meetings with US Embassy staff – including Timothy Zuniga Brown, charge d’affaires of the Washington Embassy, and Alexander Augustine Marceil, Cuban Affairs official of the US State Department – were uncovered. Garcia’s collaboration with the notorious Miami-based terrorist Ramon Saul Sanchez was exposed when a telephone conversation between the two was released. Sanchez is linked to the Miami anti-Cuba mafia and has been involved in bombings, kidnappings and murders in his attempts to topple the Revolution.

On 1 November Carlos Leonardo Vazquez Gonzalez, a Cuban doctor and intelligence agent, revealed to Razones de Cuba that while undercover he had attended a series of overseas conferences alongside Garcia. The conferences were sponsored by the US Saint Louis University and were also attended by figures such as Manuel Cuesta Morua. Morua is a Cuban counter-revolutionary on the payroll of the US government agency National Endowment for Democracy (NED). At the end of one conference, Garcia ‘excitedly stated that upon his [return to] Cuba he was going to dedicate himself to the counter-revolution’ and outlined his intention to use ‘peaceful’ protests to provoke the Cuban armed forces into confrontation (Granma, 1 November). Such confrontation could be used as a pretext to justify further intervention.

On 12 October Garcia applied for a permit to protest, using Article 56 of the Constitution which establishes the right to peaceful protests. His request was declined by the Havana authorities using Article 45 of the Constitution which states: ‘The exercise of people’s rights is only limited by the rights of others, collective security, general welfare, respect for public order, the Constitution and the laws’. The Constitution, written through popular consultation with the Cuban population, enshrines the socialist system. Garcia’s protest was rejected on the basis of his links to US regime change operatives and intention to cause chaos on the day that Cuba reopened itself to international tourism due to its vaccine success (see box below).

The streets belong to the revolutionaries

As the date approached, it became clear there was little internal support for the protests. Johana Tablada de la Torre, Cuba’s Deputy Director of US Affairs, revealed that just 2% of Tweets promoting the protests were coming from within Cuba. After insisting protests would go ahead permission or no permission, a few days before 15 November Garcia announced he was cancelling the event and would instead take a solitary walk on 14 November. He encouraged Cubans to bang pots and pans and to hang up white sheets.

When 14 November arrived, none of this happened in any noticeable way. It was the same on 15 November. The masses were not out on the streets protesting. Cubans were more interested in celebrating their vaccine achievements that meant for the first time in almost two years hundreds of thousands of Cuban children returned to their classrooms for face-to-face teaching and the borders were opened bringing international tourists back to Cuba for the first time in months. This is significant for a country dependent on tourism for much-needed currency.

Pro-revolutionary Cubans held a party outside Garcia’s door so he didn’t attempt to leave his home. Cuban authorities would likely have arrested him if he had: revolutionary Cubans will do whatever is necessary to defend their Revolution and sovereignty from US-fostered regime change. When Garcia tried to deliver a speech from his flat window, neighbours climbed onto the roof and lowered a giant Cuba flag to block him from sight. A couple of days later he decamped to Spain. The hashtag of the Cuban counter-revolutionaries #15N has been appropriately revamped as #15Nada.

The world stands with Cuba; The Guardian does not

People came out in support of the Cuban Revolution in 80 cities around the world, but imperialist media outlets spun the absence of mass anti-revolutionary protesters in Cuba into evidence of an alleged ‘crackdown’.

Imperialist media mouthpieces like the BBC and The Independent attempted to convince us that those collaborating with terrorists and stating their intent to topple the socialist system against the wishes of the majority of the population are ‘activists’ who want ‘democracy’. Revolutionary Cubans exercising their democratic and constitutional rights to defend their socialist system are scary ‘government supporters’. A spiteful article in The Guardian on 16 November quotes one university student to give the impression that ‘young Cubans’ are united in their desire to bring down the government.

Young Cubans have been targeted in the US’s social media war on Cuba. Social media influencers based in Miami have encouraged them to take to the streets. In response, a collective of dozens of young Cubans called the Red Bandanas took part in a 48-hour sit in, with political discussion and artistic expression, in support of socialism from Friday 12 to Sunday 14 November in Havana.

Cuban President Miguel Diaz-Canel joined the Red Bandanas and after a live performance by singer-songwriter Tony Avila ‘Diaz-Canel offered the Red Bandanas a few words of support and encouragement. Filling the air was the gratitude felt for a leader who is sincere, who considers himself a servant of the people, part of the people, just like them’ (Granma, 16 November).

The illegal and genocidal US blockade of Cuba was introduced over 60 years ago with the express purpose of bringing hunger and starvation to foster internal opposition leading to an overthrow of socialism. This ‘two track’ policy has resulted in massive shortages that have been worsened by the impacts of the coronavirus pandemic.

The Cuban Communist Party has responded with a reassertion of socialist principles: working hand-in-hand with the Cuban people to address problems. Following the events in July, thousands of young social workers joined the Union of Young Communists brigades to go into communities to help understand and resolve issues Cuban people are facing. What the imperialist media will not tell you, is that young people in Cuba are at the forefront of the Revolution.

RCG mobilises in solidarity with Cuba

Cuban anti-communists called  demonstrations outside the Embassy of Cuba in London to coincide with those called for in Cuba. At their first protest on 14 November they were outnumbered and unable to get in front the Embassy as they had planned. The Revolutionary Communist Group (RCG) and Rock around the Blockade (RATB) mobilised outside the Embassy in support of socialist Cuba alongside Cubanos en UK, Democracy for Brazil and Mafapo, with support from Bolivia Solidarity Campaign, Communist League, Global Majority and
Brazil Workers’ Party. We were also joined by the Communist Party of Greece, Partito Communista (Italy), Socialist Appeal, Cleaners and Allied Independent Workers Union (CAIWU) and the Committee to Defend Julian Assange.

When the Cuba Solidarity Campaign showed up, their director Rob Miller unilaterally agreed with the police that pro-Cuban protestors would move down the road and away from the Embassy. The majority of the crowd, the mostly younger participants and the Latin American activists, refused to move and stayed in front of the Embassy, taking up the offer of our open-mic to lead chants and deliver speeches.

Speakers denounced the US blockade of Cuba and the countless imperialist attempts at intervention; exposed the links between the reactionary anti-Cubans and the Miami mafia; recognised the achievements Cuba has made due to its socialist system and repeated our commitment to building political solidarity with socialist Cuba on the streets of Britain. Our coalition was able to defend the space in front of the Embassy, with chants and speeches, until all but four reactionaries had given up and left.

Supporters of revolutionary Cuba in London had a success again the next day on 15 November, when the few dozen reactionaries who turned up at the Embassy were forced to retreat after less than two hours. Again the RCG, RATB, Cubanos en UK, Mafapo, CAIWU, Bolivia Solidarity Campaign and Communist League operated an open mic which was taken up by all groups present. We ended with chants and a photo in front of the Embassy. In the face of reactionary Cubans: the streets belong to the revolutionaries!

According to Cuba’s Ministry of Public Health (MINSAP), as of 23 November, nine million (80%) of the island’s population of 11.3 million people were fully vaccinated, placing the Caribbean island second in the world for vaccination rates – ahead of Denmark, China and Australia. It is the first country to fully vaccinate children aged 2-15 and will be one of the first countries to fully vaccinate its whole population. Cuba is the only low-income country to have produced its own approved vaccines. Soberana-02, Soberana Plus and Abdala have been administered in at least one dose to 10.1 million people, and two doses have been given to at least 9.1 million. They have over 90% efficacy including against the Delta Variant of coronavirus. The Chinese vaccine Sinopharm has also been deployed in Cuba.

Cuba now has one of the highest vaccination rates in the world; in combination with stringent infection control measures including house visits, testing, tracing and quarantine as well as public education and mask wearing, its outstanding vaccination strategy means fatalities fell from over 80 a day in mid-August to an average of three a day by 14 November. This allowed Cuba to re-open the economy to international tourism and open schools on 15 November.

Meanwhile, in other low income countries which are dependent on purchasing vaccines from the imperialist pharmaceutical monopolies, 98% of people are not fully vaccinated (see p4). Cuba has now produced all the vaccines it needs for its own population and can focus on exporting and donating its vaccines to Latin America, Africa and Asia. The vaccines are produced by the publicly-owned biotech sector which isn’t driven by profit. A new biotech institution for the creation of vaccines and other medicines, the CIGB-Mariel Biotechnological Industrial Complex, was opened in the Mariel Special Development Zone on 1 November.

Already, six million doses out of a planned 12 million of the Abdala vaccine have been shipped to Venezuela. One million doses out of a planned five million have been shipped to Vietnam, 150,000 of which were donated. On 22 November, Cuba and Zimbabwe revived plans to open a vaccine plant in the latter country to improve its medical independence. Iran and Nigeria have also partnered with Cuba to develop their own home-grown vaccines. Cuba is in talks with the World Health Organisation for its vaccines to be approved for use by the UN institution.

Cuba’s socialist development has made its vaccination strategy possible. This achievement is now the greatest hope for millions of poor and oppressed people internationally to be vaccinated against Covid-19 over the next few years.