A group of young, Miami-based Cuban (recent) exiles command broad audiences on YouTube, broadcasting daily and very aggressively, overtly supporting Trump, calling for US economic, political and even military aggression against Cuba and cheering on sanctions designed to create suffering on the island, where many of them still have, and visit, family. In January 2020, these YouTubers called for a strike by Cubans in the US, demanding that they stop sending remittances and visiting their families on the island. They also organise persecution of Cuban musicians who refuse to condemn their government, to have them ‘blacklisted’ so they cannot perform in US venues.

Recently, other more extreme YouTubers have been offering money to Cubans on the island to commit violent disorder and even murder. Often this takes the form of telling followers ‘we can recharge your cell phone with $100’ or it can be more explicit. One Facebook post, for example, says ‘For young entrepreneurs: $1,000 to set fire to a police car; $2,000 for police vans; $5,000 for shops in MLC’ (freely convertible money – that is, the recently opened hard currency stores which accept US dollars among other currencies). As a result of this enticement, some criminal acts have been carried out and perpetrators arrested. Cuban television has broadcast them admitting to what they did, explaining their monetary motivation, and naming the online contact who set up the deal. For example, one man threw a stone through a shop window and was instructed to broadcast live on Facebook as he ran away claiming that the ‘fucking communists’ were chasing after him – which was a lie. Another threw a Molotov cocktail at a petrol station in a residential area. Some YouTubers are inciting murder of Cuban police – $500 CUC each.

The art of lying

Denis Solis Gonzalez is part of a collective of ‘artists’ who live in a house on San Isidro street in Central Havana. After he missed two police summons, on 7 November a police officer went to his home to give him a new summons. He accepted it violently while live streaming on Facebook and swearing at the officer and declaring in English ‘Trump 2020, Trump is my President!’. He was subsequently arrested and on 12 November was sentenced to eight months for insulting a police officer (the maximum sentence is 11 months).

Following Solis’ arrest, others in the San Isidro ‘collective’ declared they were on hunger strike until he was released. Some of them claimed they were not drinking water. This was, of course, a complete lie and part of a media show. The Cuban state filmed them receiving food deliveries, and they filmed themselves partying inside the house and dancing almost naked in the street – antagonising their neighbours. Clearly this is not the behaviour of people on hunger and water strike. They were constantly live streaming their ‘protest’, denouncing ‘human rights abuses’ on Facebook. The international media served as an echo chamber, magnifying their significance, while Cubans further down the street had no idea who they are.

After several days, the Cuban exile Carlos Manuel Álvarez who is known to be linked to US-funded opposition media and groups and lives in Mexico, arrived in Cuba via the US. Cuba’s Covid-19 border protocol requires everyone entering the country to isolate for 24 hours until they receive the results of their PCR test taken at the airport. Cubans must continue to isolate until they get the result of a second PCR test taken five days after entry. However, Álvarez went straight to the house at San Isidro; consequently the police and medics entered in the night and removed all those inside, taking them for Covid-19 tests, and releasing them a few hours later. Subsequently, all of them stopped their ‘hunger strike’ either immediately or in the next few days and went to other homes. Unlike the US administration in Guantanamo prison camp, Cuba does not force feed hunger strikers.

Such is the arrogance of these ‘artists’ that they themselves have broadcast images from inside the car of the top US diplomat in the US embassy in Havana. Cuban media has in turn broadcast images of him hanging around San Isidro. Some of the artists have proclaimed there is nothing wrong with this flagrant violation of diplomatic norms. Cubans accuse the embassy staff of being CIA agents and providing material support for a ‘soft coup’ in Cuba.

The Ministry of Culture

The day after the artists were detained, on 27 November, a group of Cuban artists decided to gather outside the Ministry of Culture to demand greater artistic freedom. Some said they were in solidarity with the San Isidro group, others distanced themselves from it. But the timing of their protest was no coincidence. They expressed a more general and longer-standing discontent with a proposed law (Decree 349) which places restrictions on artists freedoms: requires them to seek licences for exhibiting and selling work, prohibits pornography and other exploitative depictions, and forms of art that offend ‘la patria’ (the nation). This law was withdrawn pending discussion with Cuban artists, given the general discontent surrounding the proposals including from well-known artists committed to the revolution.

The crowd outside the Ministry grew to around 200 and they were left in peace to do performances. After several hours, a group of 30 were invited into the Ministry to speak to the deputy Minister (the Minister of Culture was outside of Havana at the time). They agreed to meet on 20 December for dialogue. The event ended with everyone clapping. The Miami YouTubers were incensed. Meanwhile a protest held in Miami was ended by local police with arrests made.

Subsequently, however, the artists who went to the Ministry issued a list of preconditions including a list of people they demand to be present at the meeting. It included known US-sponsored mercenaries and the Cuban President, Miguel Diaz-Canel. The government has no intention of negotiating with mercenaries and has called the meeting off. 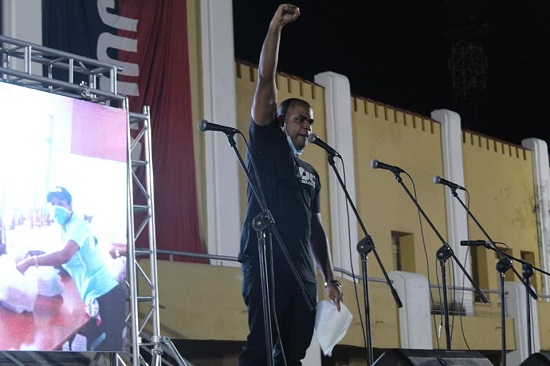 The day after the Ministry of Culture protest, a group of young Cubans called a rally via social media to express support for the revolution. Some 5,000 turned out, and President Diaz-Canel turned up saying he had seen it on television and could not stay away. Other larger solidarity events were then called by FEU (Federation of University Students) in Havana and around the country.

There is a concerted push from the right-wing Cuban exile movement in the US - linked to and funded by the US establishment - to make the most of the final weeks of the Trump administration in the hope of sparking social protest within Cuba which can be manoeuvred into a soft coup. Clearly they are far from having the power to topple the Cuban state. But a second bet would be to provoke a crack-down by the state that will make it more difficult for the incoming Biden administration to return to a policy of rapprochement. The arrest of the USAID-funded US mercenary Alan Gross in December 2009 had the same impact in the first year of the Obama administration. Gross’s incarceration acted as an obstacle to any policy change until Obama’s second term and rapprochement had to be prefaced by Gross’s release (on 17 December 2014, the same day as the remaining members of the Cuban five were returned to Cuba).

According to the Cuba Money Project, which monitors US public spending on regime change programmes aimed at socialist Cuba, ‘A sprawling network of U.S. government-financed groups sends cash to thousands of Cuban democracy activists, journalists and dissidents each year’ (12 December 2020). Since Trump came to power, at least 54 groups have received funding from USAID or the National Endowment for Democracy to promote ‘democracy’ (US imperialism) in Cuba. In the midst of the provocations by the ‘San Isidro’ dissidents, on 24 November a new USAID programme was advertised offering $1 million for programmes in Cuba. This was a blatant attempt to create a protest movement-for-hire.

The current wave of attacks is likely to be sustained at least until the transition to a Biden government. Rock Around The Blockade, solidarity campaign of the Revolutionary Communist Group, stands with millions around the world who will defend Cuba from these imperialist-orchestrated attacks. In recent weeks, we have organised solidarity protests around Britain against the illegal US blockade of Cuba and to highlight Cuba’s outstanding internationalist response to the Covid-19 pandemic, which includes sending 54 medical brigades to save lives around the world. We will continue to demonstrate our solidarity with the people of Cuba in their struggle against imperialism.

Hands off Cuba! No to blockade and provocations! Down with US imperialism!

By Rock Around the Blockade