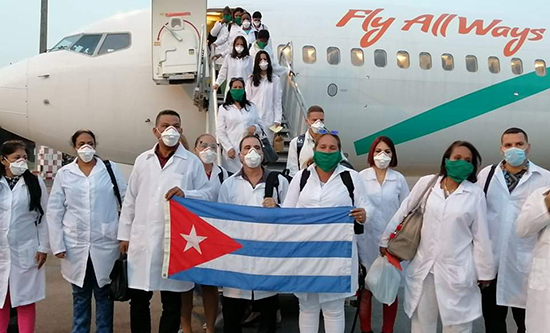 By 21 March, Cuba had sent healthcare professionals to 37 countries to collaborate in combating the pandemic. Italy received 53 Cuban medics who had previously worked in West Africa during the deadly Ebola outbreak of 2014. Cuba also stepped into the breach in mid-March when a cruise ship with over 600 mostly British passengers and a handful of Covid-19 cases were left stranded for a week after the US and neighbouring countries denied them permission to dock. Cuba let them in, treated the sick and assisted their transfer on to flights home. Thus, Cuba is taking a leading role in tackling this global pandemic. Just how can a small, Caribbean island, underdeveloped by centuries of colonialism and imperialism, and subject to punitive, extra-territorial sanctions by the United States for 60 years, have so much to offer the world?

In response to the Covid-19 pandemic, capitalist governments have adopted emergency powers, introduced as ‘a last resort’ in societies where neoliberalism has put down deep economic and ideological roots. For decades we have been told that only the free market ensures efficiency. Now this global health crisis brings the very concept into question. The Cuban contribution demonstrates that a socialist state can achieve efficient outcomes, measured by societal need, not private profit.

After the Cuban Revolution of 1959, the revolutionary government developed a free, universal healthcare system, attaining more doctors per person than any other country in the world. This has been facilitated by free, universal access to education at all levels. The benefits are distributed globally; some 400,000 Cuban medical professionals have worked overseas in six decades, mainly in poor countries, providing healthcare that is free at the point of delivery.

Cuba is recognised globally both for its infectious disease controls and disaster risk reduction, usually in response to climate-related and natural disasters. These experiences are being harnessed to combat Covid-19. The Cuban healthcare system seeks prevention over cure, with a network of family doctors who are responsible for community health and live among their patients. To combat the outbreak, healthcare personnel are conducting door-to-door health checks, testing, contact tracing, quarantining, establishing a registry of those with underlying health conditions who may need additional attention. This is accompanied by public education campaigns and daily updates through a new app covid-19-InfoCu on Infomed, the country’s public health internet platform. By 22 March, Cuba had 35 confirmed cases of Covid-19, one fatality, and nearly 1,000 patients under observation in hospital, around one-third of them foreigners and over 30,000 people under surveillance at home. On 23 March, Cuba closed its borders to all non-resident foreigners in order to control the outbreak, a tough decision given the importance of tourism revenue to the state.

Interferons as a model for Cuban biotechnology

The work of Cuban medical scientists with interferons in the early 1980s catalysed the early and distinctive development of their biotechnology industry. As a result of Fidel Castro’s vision and collaboration with medical scientists in the US and Europe, Cuba first made and used interferons to arrest a deadly outbreak of the dengue virus in 1981.* ‘We have taken Interferon as a model for the development of biotechnology in our country’, announced Dr Luis Herrera in 1986. Interferon Alfa 2b was being developed by capitalist big pharma, however, while their products shared a common active ingredient, the Cuban formulation (components) is distinct and, in that sense, Cuban Interferon Alfa 2b is a unique product. The Cubans were also the first to use the drug as part of a mass anti-viral public health campaign.

The biotech sector was launched in the United States with venture capital. The world’s first biotechnology enterprise, Genetech, was founded in San Francisco in 1976, followed by AMGen in Los Angeles in 1980. Internationally, the biotech sector did not achieve profits from product sales until 2009. Nonetheless, billions of dollars poured into the industry. Why does money from venture capital and big pharma flow into an industry in which profits are so hard to come by? The answer is the role of financial mechanisms such as Initial Public Offerings (IPOs), Special Purpose Entities (SPEs), Special Purpose Corporations (SPCs), and patents licences, in permitting profits to be made from a high-tech sector with low productivity. Start-up firms typically depend on venture capital investment to underwrite their initial costs. Once some promising products are developed, venture capitalists and other early-stage investors seek to recoup their investment by having the firm issue stock to the public in an IPO.

Biotech companies will only undertake research in products for which a profitable market is deemed to exist, and their development and use will be abandoned if that profit does not materialise, they lose the support of investors, or stock prices fall, and so on. Biotechnology products can take up to 20 years to commercialise, and many will never reach that point. By 2002, only about 100 biotech-related drugs had reached the market, with the top ten accounting for nearly all sales. Virtually all biopharma companies that do IPOs are productless. However, financial speculation permits stock-market investors to reap huge rewards by trading biopharma stock even in the absence of a commercial product.

Furthermore, public investment underlies this private profit. The US government gives huge financial, legislative and regulatory support to the sector. Two researchers on the topic conclude: ‘The biopharmaceutical industry has become big business because of big government [and] remains highly dependent on big government to sustain its commercial success.’ Between 1978 and 2004, the US government’s National Institutes of Health (NIH) spent $365 billion on life sciences. Commodification of publicly funded medical research has been legalised. Regulatory assistance is channelled through US patent policy, the Food and Drug Agency (FDA) approval process and decisions concerning what drugs or therapies to include on national health care programmes.

Thus, the Cuban biotech industry is not exceptional just because it receives government support and public funding. It is exceptional because of the political economy of Cuba; its centrally planned, state-controlled economy, and a development strategy which has prioritised healthcare, education, and research into science and technology from the early 1960s.

In 1981, the Biological Front, a professional interdisciplinary forum, was set up to develop the biotech industry in Cuba, just five years after Genentech in the US. While most developing countries had little access to the new technologies (recombinant DNA, human gene therapy, biosafety), Cuban biotechnology expanded and took on an increasingly strategic role in both the public health sector and the national economic development plan. It did so despite the US blockade obstructing access to technologies, equipment, materials, finance and even knowledge exchange.

Founded solely through state investment, with financing guaranteed through the state budget, the Cuban biopharma sector is state owned, with no private interests or speculative investments. ‘Our shareholders are all 11 million Cubans!’, Agustín Lage Dávila, Director for the Centre for Molecular Immunology replied to the head of a multinational pharmaceutical company who told him how many investors they had. Cuban biopharma is driven by public health demand, profit is not sought domestically because the sector is completely integrated with the state healthcare system. The sector has been characterised by the fast track from research and innovation to trials and application. Medicines that Cuba cannot afford or cannot get access to because of the US blockade have to be produced domestically. Today, nearly 70% of the medicines utilised in Cuba are produced domestically.

Cooperation prevails over competition as research and innovations are shared between different institutions. Teams of scientists are established to take a project through from basic science, to product-oriented research, to manufacturing and marketing; activities that are carried out by different businesses in most countries. Dr Kelvin Lee, Director of Immunology at the Roswell’s Park Cancer Institute in New York highlights these ‘striking’ and ‘unique’ characteristics of the Cuban biotech sector: ‘They start with identifying a need, then figure out the science to develop that in the lab, manufacture their agent, test it in the Cuban medical system and then commercialise it and sell it overseas.’ Under a licence issued by former US President Obama, Roswell Park is conducting clinical trials on CIMAVax-EGF, Cuba’s innovative lung cancer vaccine. By contrast, in capitalist countries, Dr Lee explains, typically a small start-up is established to investigate the science behind a ‘great idea’. It is subsequently bought out by a larger company, sometimes twice, which might decide ‘well, you developed this drug for a really rare disease but we’re going to use it to treat lung cancer’, and subsequently ‘it really bombs and a great idea disappears’. The disadvantage the Cubans face, he adds, is that they can’t pursue thousands of good ideas and write off those which don’t work as sunk costs. ‘They don’t have the resources to do that’. Their access to capital is extremely limited. To compensate for that, he says: ‘They are very thoughtful, thorough planners.’

What have been the fruits of this distinctive Cuban system? Cuban professionals have received ten gold medals from the World Intellectual Property Organization (WIPO) over 26 years. The first was in 1989 for the world’s first Meningitis B vaccine; another was for the Haemophilus influenza type b (Hib) vaccine, another for Heberprot-P for diabetic foot ulcers which affect some 422 million people worldwide. The treatment reduces the need for amputations by 71% and in ten years 71,000 Cubans and 130,000 people in 26 other countries received the treatment. Another WIPO award was for Itolizumab, for treating psoriasis, also benefitting over 100,000 people worldwide.

In 2015, the World Health Organization announced that Cuba was first in the world to eliminate mother-to-child HIV transmission. Cuba has prevented an AIDS epidemic with domestically produced antiretroviral medicine that halts patient transmission. Cuba’s mortality curve for AIDS continues to fall. The universal use of the CIGB’s hepatitis B vaccine on newborns means Cuba should be among the first countries free from Hepatitis B. This is one of the eight vaccines (out of 11 vaccines for 13 diseases) administered to Cuban children which are produced in Havana’s Science City. Within ten years, 100 million doses of Cuba’s Hep B vaccine were used around the world.

Cuba achieved a complete congenital hypothyroidism screening programme before the US. Cuba’s Immunoassay Centre developed its own Ultramicroanalytic System (SUMA) equipment for prenatal diagnosis for congenital anomalies. In 2017, the Immunoassay Centre produced 57 million tests per year for 19 different conditions. Cuba’s Centre for Neuroscience is developing cognitive and biomarker tests for early screening of Alzheimer’s disease.

The Cuban biotech sector has nearly 200 inventions and products marketed in 49 countries, with the capacity for large-scale production of Cuban and generic drugs for export cheaply to developing countries, and partnerships in nine countries in the global south. The difference between Cuba’s state owned and public-health orientated biotech industry, and the speculative profit-seeking of capitalist firms, has been exposed by the global pandemic. Cuba provides a lesson for us all.