Blockade Esso, not Cuba! Hands off Latin America! No to the fascist coup in Bolivia! 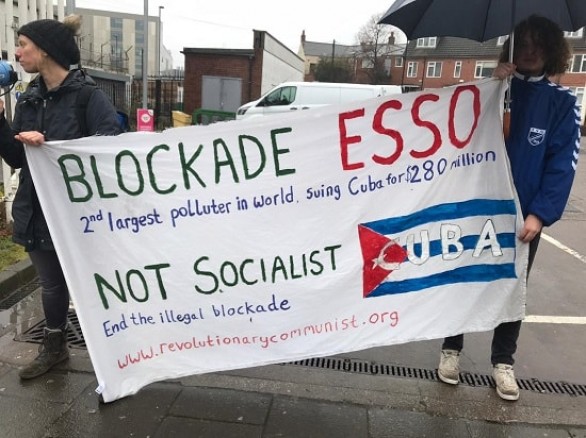 Pickets of Esso garages took place across England and Scotland as the Revolutionary Communist Group and Rock Around the Blockade took action against the illegal US blockade on Cuba. With a racist coup unleashing bloodshed in Bolivia against the Movement Towards Socialism government and their indigenous supporters, the pickets were broadened to urgently protest against US, EU imperialist interests in Latin America. ExxonMobil (whose European trading name is Esso) is the first to bring lawsuits against Cuban state companies under the newly activated Helms Burton Title III legislation of the US blockade. Not only does ExxonMobil target Cuba, back the brutal coup in Bolivia and back destabilisation in Venezuela, it heavily contributes to climate change and environmental destruction which threatens the future of life on Earth.

Our protests joined an international day of solidarity with Cuba proposed by Gloria La Riva of the Party for Socialism and Liberation and agreed at the Anti-Imperialist Conference in Solidarity for Democracy and Against Neoliberalism on 1-3 November in Havana, Cuba. https://revolutionarycommunist.org/americas/cuba/5733-fighting-the-neo-liberal-offensive-in-latin-america-the-people-united-will-never-be-defeated

On Wednesday 13 November the Revolutionary Communist Group (RCG) picketed the Esso garage on Park Lane in London, following earlier successful pickets of Esso over the summer. On Saturday 16 November, Esso stations in Nottingham and Newcastle were blockaded alongside speak-out events in Manchester, Birmingham, Glasgow, Brixton, Holloway and Hounslow.

ExxonMobil, the US oil and gas giant, is attempting to sue Cuba for $280m over the use of property it claims was stolen from it during the revolution almost 60 years ago. ExxonMobil, the second biggest polluter in history, is attacking Cuba, the country leading the world in sustainable development according to the World Wildlife Fund, United Nations and Global Footprint Network.

While ExxonMobil pollutes the planet at incredible rates, it has pumped millions of dollars into climate change denial and lobbying against action to reduce carbon emissions ($41m per year), putting its profits before our planet. It is responsible for over 3% of all CO2 emissions. This is costing human lives.

ExxonMobil is also pushing for the US to attack Venezuela, which if successful would allow the company to take control of the world's largest oil reserves. This year it tried to start oil exploration in disputed waters, under the assumption that Venezuela’s socialist government was about to be overthrown by an unsuccessful US-backed military coup.

ExxonMobil is also a corporate sponsor of regime change proponents in Bolivia; the Inter-American Dialogue neoliberal thinktank, of which opposition leader Carlos Mesa is an ‘in-house expert’, received funds from the oil company. ExxonMobil was kicked out of Bolivia in 2006 when the Morales government nationalised its energy resources in order to use them to benefit Bolivians instead of enriching US and European multi-nationals. Now ExxonMobil has its eye on Bolivia’s sizable lithium reserves. ExxonMobil is therefore complicit in the fascist coup in Bolivia which is killing indigenous activists https://revolutionarycommunist.org/americas/bolivia/5734-the-lion-has-awoken-indigenous-people-of-bolivia-rise-up-against-imperialist-coup

As corporations like ExxonMobil destroy the planet, Cuba shows that socialism can meet human needs without destroying the environment. Despite the 60-year US blockade, Cuba still guarantees to meet the basic needs of everyone and continues its internationalist commitment by sending doctors around the world. An attack on Cuba is an attack on the working class everywhere. Companies and individuals that attempt to capitalise on Title III of the Helms-Burton Act should be publicly opposed and we will continue to target those who attack Cuba, drawing in those who seek an open, political, anti-capitalist movement which directly confronts imperialism which is behind the climate crisis.

Let’s send a message to ExxonMobil and all those complicit ‘If you blockade Cuba, we will blockade you!’