Mayday in Cuba: Workers have more reasons everyday to struggle and win 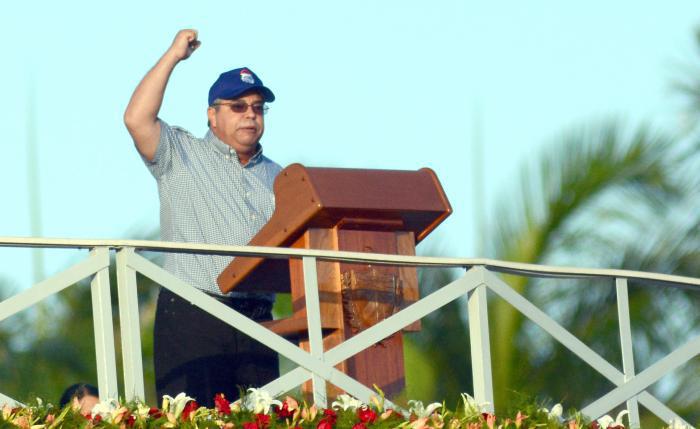 May 1, a march celebrating International Workers Day took place in Havana, with Army General Raúl Castro, first secretary of the Communist Party of Cuba and President of the Councils of State and Ministers, on hand.

Fifty thousand youth led the parade of workers in the capital on May Day which was dedicated to them this year, as the present and future of the homeland.

Cubans are motivated to march by the Revolution's social conquests, its continuity into the future, and the challenges of building a more just, prosperous, and sustainable society.

Many generations of Cubans came out to pay tribute to Fidel and to Che, on the 50th anniversary of his death in combat; to defend the country's sovereignty, demanding an end to the U.S. economic, financial, commercial blockade and the return of territory illegally occupied by the Guantánamo Naval Base.

Below follows the full text of speech by Ulises Guilarte de Nacimiento, member of the Party Central Committee Political Bureau and secretary general of the Cuban Workers Federation, during Havana's May Day commemoration

Compañero Army General Raúl Castro Ruz, first secretary of the Party Central Committee and President of the Councils of State and Ministers;

As we do every year throughout the country, today we celebrate International Workers Day, with the living memory of our beloved, unforgettable, and undefeated Comandante en Jefe, Fidel Castro Ruz.

It was in this very plaza, on May Day in 2000, packed with men and women who have carried forward and defended the work he began, where Fidel expressed to us his concept of Revolution. Upon signing it after his physical disappearance, Cubans made it a scared oath of loyalty to his legacy and an unwavering commitment to continuing the construction of a sovereign, independent, socialist, democratic, prosperous, and sustainable nation.

Our compact, colorful marches through plazas and avenues, under the maxim of "Unity is our strength," constitute a genuine, resounding popular demonstration of support for the Revolution, the Communist Party of Cuba, and its historic leadership.

This May Day celebration has become an opportunity to honor the value of work, to take advantage the untapped productivity and efficiency in our industrial workforce, which would allow for the generation of greater wealth, the reduction of prices, and gradual increases in income, in addition to favoring the development of productive chains, in a secure, healthy, environment in all of our workplaces.

On this occasion we evoke important events which have dignified our history and traditions of struggle, such as the 56th anniversary of the victory at Playa Girón and the proclamation of the socialist nature of the Revolution; and the 55th of the Young Communist League's founding - firm, honorable followers of those who almost 60 years ago changed the course of the homeland's history.

We also commemorate the 50th anniversary of the death of our Heroic Guerilla,

Ernesto Che Guevara, promoter of the struggle for industrialization of the country, voluntary work, and the Innovators and Rationalizers Movement, who died upholding the purest internationalist ideals.

In the current worldwide geopolitical context, it is impossible to forget that we live under an unjust, exclusive international order, in which growing globalization of an economy - facing the impact of capitalist crises and neoliberal policies - has created more challenges and dangers for Latin America and the Caribbean, reaffirming for us that the objective of building the Greater Homeland of which our predecessors dreamed requires, now more than ever, the will and firm conviction to defend regional progress in terms of cooperation, joint political action, and integration, with the mobilization of left political forces.

On this day, we make our own the words of Army General Raúl Castro Ruz during the 5th CELAC Summit, when he referred to relations between Cuba and the United States, saying, we can "cooperate and coexist in a civilized fashion, respecting differences and promoting all that benefits both countries and peoples, but it cannot be expected that, in order to do so, Cuba should make concessions which are key to its sovereignty and independence.

We reiterate once again our legitimate demand for the elimination of the economic, commercial, financial blockade imposed by the United States government, which has caused our country so much damage and depravation, and is the principal obstacle to the economy's development. We likewise demand the return of territory illegally occupied by the United States Naval Base in Guantánamo, against the will of the Government and people of Cuba.

The Federation of Cuban Workers and our trade unions express our unconditional support and solidarity with the Bolivarian Revolution; we reject the political maneuvers and diplomatic harassment to which it has been subjected by the discredited Organization of American States (OAS) and other reactionary sectors of the region. We support the civil-military union, led by the government of President Nicolás Maduro, struggling to defend its sovereignty, independence, and the most genuine interests of the nation.

At the same time, we reiterate our solidarity and support to workers around the world confronting the discriminatory policies of capitalism and being repressed for demanding the most elemental social and labor rights.

We are proud to celebrate the world proletariat's holiday with the presence among us this morning of comrades and friends from a variety of trade union organizations, solidarity groups, and social movements. In the name of all Cuban workers, we thank you for your consistent support of our homeland.

There are more reasons everyday for our workers to struggle and win. Cuba will not renounce its ideals of independence and social justice. We have won this sovereign right with great sacrifices and at the cost of greater dangers.

Forward comrades, more united than ever, believing deeply in the certainty of our victory!

Long live the workers of Cuba and the world!