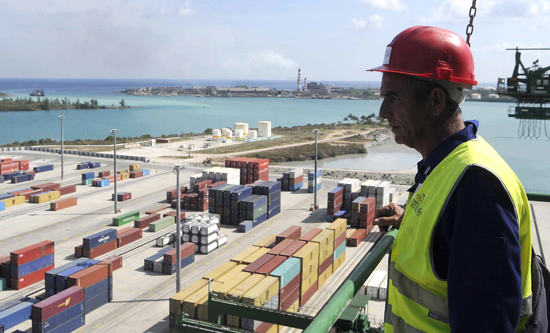 The US blockade of Cuba is illegal under international law, EU law, UK law, and the national legal systems of many countries. It causes suffering and rights violations. Beyond legal retaliation for Cuban expropriations of US properties in the early 1960s, the blockade was always conceived as part of a set of measures to achieve regime change. A 1960 US government memorandum formulated it as such: ‘The majority of Cubans support Castro … There is no effective political opposition … The only foreseeable means of alienating internal support is through disenchantment and disaffection based on economic dissatisfaction and hardship … every possible means should be undertaken promptly to weaken the economic life of Cuba’ (Lester Mallory, Deputy Assistant Secretary of State). Obama denounced the US ‘embargo’ as ineffective, not as illegal.

It is illegal under UK and EU law to comply with the extraterritorial legislation of the 1996 Helms-Burton Act. On paper, complying companies can be fined. However, UK and EU laws are not enforced, while US law is avidly enforced by OFAC. The UN calls on all countries to legislate against the US blockade’s extraterritorial reach, but no action has been taken so international trade with Cuba continues to be severely limited.

‘Businessman’ Trump sent corporate representatives to Cuba in 1998, and again in the 2000s to probe for openings, in violation of the US blockade. In September 2015 he said ‘the concept of opening with Cuba is fine’. However, once he became a serious presidential candidate, addressing the Cuban-American power-brokers in Miami in September 2016, he threatened to reverse Obama’s executive orders and demand ‘freedom’ in Cuba.* Trump’s transition team included three hard-line right-wing Cuban-Americans advocating the continuation of the US blockade and an end to rapprochement. But he also included businessmen who do want to end the blockade.

So far, President Trump has made no move on Cuba. The US business sector is keen to trade with and invest in Cuba, and the political costs of initiating this process have already been paid by Obama. Reversing the deals made under Obama would have new political and economic costs. Those companies involved would demand indemnification and US capital would continue to lose out as Cuba expands its international economic relations – bolstered by the Mariel Special Development Zone and 2014 Investment Law.

‘We must rid ourselves of unfounded fears of foreign capital; We are not heading toward, nor will we head toward capitalism, this is totally ruled out, as is established in our Constitution’ (Raul Castro, December 2016).

Cuban economists estimate that a minimum annual growth rate of 5% is required to see significant socio-economic improvements and the kind of infrastructural developments necessary to raise the standard of living for all. However, between 2011 and 2015, GDP growth averaged 2.7%. To double that, an investment rate of 20% of GDP is required, but the government cannot find the capital it needs for investment internally. It needs foreign direct investment (FDI) and is striving for $2bn to $2.5bn investments annually. This explains the current opening to world markets. While international interest exists, a cautious approach and lack of experience on the Cuban side has slowed the process of approving investments. Only $1.3bn worth of investment projects were approved within two years of the 2014 Investment Law – well below what Cuba needs.

Settling its old debts is key to attaining future FDI for Cuba. After the Helms-Burton Act stated that information about Cuba’s economy would be used against it, the Cuban government stopped publishing information about its debt and financial reserves. Recent debt resettlement deals made between 2013 and 2016, on extremely favourable terms, reveal the historic burden of Cuban debt. However, major advances have been made in settling these: Russia – 90% of USSR-era debt ($35bn) cancelled with ten years to pay the rest on favourable terms; Mexico – 70% of 1980s-era debt ($487m) cancelled, the rest to be paid over ten years; and the Paris Club – 70% (of $11.1bn) cancelled, the rest to be paid over 18 years. Similar negotiations are underway with the London Club. Cuba has also restructured its $6bn debt with China. Raul Castro is committed to clearing these debts.

In January 2017, Rodrigo Malmierca, Cuban Minister of Foreign Trade and Foreign Investment, announced that Cuba’s 2016 investment portfolio included 395 projects, ranging from tourist resorts to peanut production, amounting to $9.5bn of investments, up from $8.2bn in 2015. January’s annual trade fair in Havana had a record-breaking 3,500 exhibitors from 73 countries. Securing FDI, which is necessary in order for Cuba to upgrade its productive infrastructure, would be significantly easier and less costly with the elimination of the US blockade.

The state of the Cuban economy

The significant debt repayments being made exacerbate the financial constraints and economic problems which saw the Cuban economy contract in 2016 for the first time in 23 years. Cuba was bracing itself for a difficult economic year, partly because of the deteriorating situation in Venezuela. In December 2016, Raul explained: ‘limitations in the supply of fuel and financial tensions worsened during the second half of the year, leading to a decrease in the Gross Domestic Product of 0.9%. Despite this, our free social services, such as education and public health for the entire population, were preserved. Our economy did not collapse, nor did the black-outs we experienced in the most difficult moments of the Special Period return, as more than a few international media outlets predicted.’ There was, however, a return to problems with paying for imports, he said. Economic problems were exacerbated by the extensive damage wrought in easternmost Cuba by Hurricane Matthew in October 2016.

The announced deadline for monetary unification, to remove the dual currency system, has come and gone without success and the process is now unlikely to happen within the next five years. Sheltering the entire Cuban population from the detrimental impact of the process requires a huge financial reserve which is beyond Cuban capacity for now. ‘In regards to the 2017 plan and budget’, Raul announced, ‘I must warn that financial tensions and challenges persist, that may even worsen in some circumstances’ (December 2016). Nevertheless, he said, GDP growth was expected to be positive at 2%.

Now close to one in three Cuban workers are in the non-state sector (doubled since 2010). This includes agricultural and urban cooperatives, usufruct farms, self-employment and small and medium private businesses. There has been a substantial relocation of workers from the state to the non-state sector, but also significant has been the integration of thousands of Cubans from the informal sector to the formal sector. These workers are now registered, receive protection and pay taxes. In a country where taxation all but disappeared for half a century, the construction of a progressive, redistributive taxation apparatus has been an important task. Nearly 500 non-agricultural/urban cooperatives have been set up.

The self-employed and small private sector is mostly occupied in catering services: restaurants, cafes and bars. Some of these enterprises have dozens of employees (so-called ‘contracted workers’), introducing new relations of production which bring complex challenges for socialist Cuba. At the 7th Congress of the Cuban Communist Party (CCP) in April 2016, Raul highlighted the need for new regulation for the private businesses, as existing regulation is applicable to self-employed and family businesses only. This has still not been introduced. It is urgently needed, but cannot be rushed, linked as it is to the larger task of redefining the character of Cuban socialism.

Following the April 2016 Congress, two documents were circulated for national debate at every level: Conceptualisation of the Cuban Economic and Social Model of Socialist Development and Basic Premises for the Social and Economic Development Plan through to 2030. Raul announced that the revised documents would be approved in the first half of 2017 by the CCP Central Committee Plenum.

New challenges face Cuba, with the economic reforms underway and restoration of diplomatic relations with the United States. Whatever action or inaction we see from Trump, Cuba is prepared: the Conceptualisation and Plan 2030 documents make no assumptions about changes in US policy toward Cuba. Raul Castro has asserted the need for ‘civilised co-existence’ with the US, but not at the cost of sovereignty, independence and socialism.

* This echoed his 1999 speech to the Cuban American National Foundation during his previous presidential bid for the Reform Party.