Raúl to the people of Guantánamo: “We will recover” 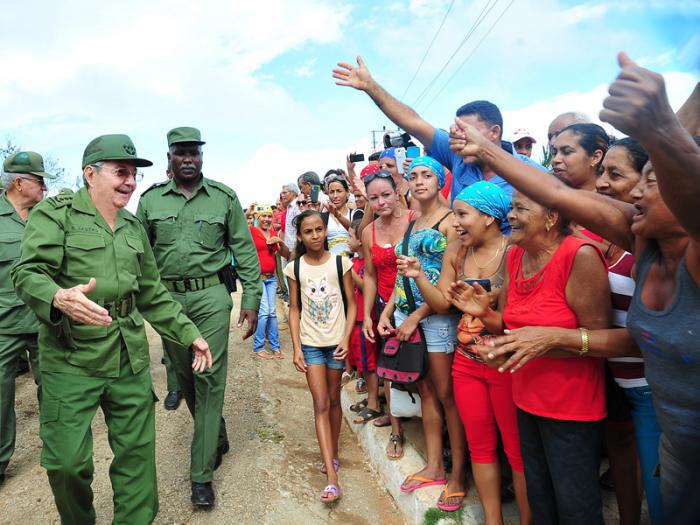 “It is now vital to identify the damages precisely and as quickly as possible, in order to determine what is needed in each place,” Army General Raúl Castro Ruz stated during a working meeting held this Monday, October 10, at the Municipal Defence Council. Raúl outlined the key issues for the recovery of the municipality of Maisí, where the towns of La Máquina (the municipal capital), Punta de Maisí and Los Llanos, were the hardest hit with the passage of Hurricane Matthew.

The President of the National Defence Council was accompanied by Army Corps General Ramón Espinosa Martín, deputy minister of the Revolutionary Armed Forces, who is currently based in the most affected areas, together with other national and local leaders, overseeing the measures implemented in the recovery stage.

He noted that it is estimated that over 90% of homes in the area were severely damaged, as well as the majority of state facilities. Vital services for the population, such as communications, electricity and water supply, were also severely affected.

During the meeting, the negative impact of the atmospheric phenomenon on access routes to this municipality and on agriculture, mainly coffee plantations (Maisí is the largest coffee producer in the country), were also discussed.

Given this situation, Raúl emphasized the urgency of seeking alternatives to ensure the people are provided with necessary resources. Likewise, he stressed the importance of recording all the experience gained from the passage of this weather event, to be used in future scenarios.

The President of the National Defence Council also participated in the meeting which took place at the municipal Party headquarters, where Lina Pedraza Rodríguez, minister of Finances and Prices, informed the presidents of the eight people’s councils in this municipality on how to implement the decision of the revolutionary government as regards the sale of construction materials to those whose homes had been affected.

Residents gathered in the streets to welcome the Cuban President and reiterated their confidence in the Revolution.

“You received a heavy blow, but we will recover,” Raúl assured as he shook hands and received embraces. Meanwhile, the people expressed their thanks over and over again to Fidel and to Raúl himself for their constant support.

“This visit strengthens us, it encourages us to keep going,” stated Erodis Fuente López, who offered his home to shelter almost 40 people.

“Trust in us that we will succeed! The most important thing is that we are alive! Send our greetings to the Comandante! Take care!” These are some of the messages expressed by the population as Raúl toured the area. Meanwhile, the Cuban President thanked those gathered for their continued resistance and called on them to return to their normal daily activities as soon as possible, in particular the resumption of classes, which he reiterated could take place in any adequate space.

Again there were scenes of emotion and hope as those gathered offered and received advice, anecdotes, and took photos alongside their President.

“I congratulate you because you are courageous, composed and very revolutionary. I'm proud of Cuban women and men across the country, but above all of you, because this has been a very tough test,” Raúl stated in response to the excited cheers of residents.