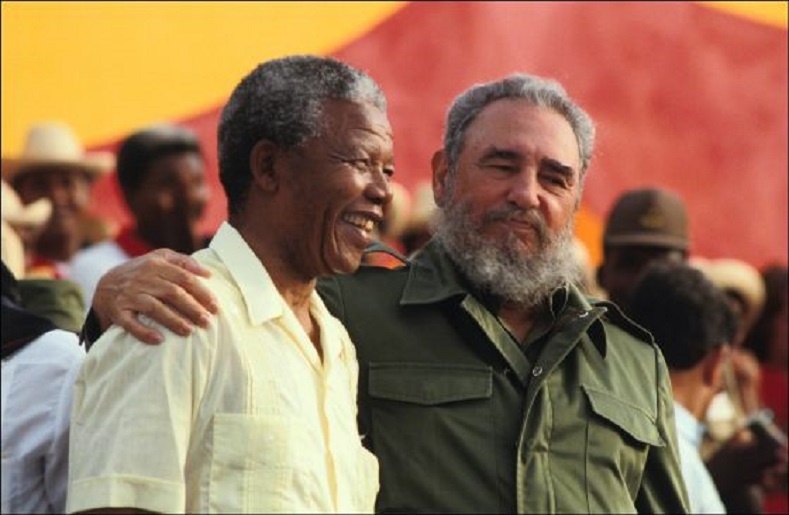 Defence of the Spanish Republic during Spain’s civil war is probably the most well-known modern European example of a highly organized and committed progressive solidarity movement. Currently, international solidarity activity in the Americas and in Europe remains closely associated with progressive political movements and governments working to defend their peoples against NATO country aggression of one kind or another. They do so despite determined efforts at co-option by Western governments and corporations along with their media and NGOs.

Selfless people in solidarity with grassroots resistance from Palestine to Mexico have made huge sacrifices trying to defend vulnerable communities from aggression and abuse. In Palestine, Rachel Corrie’s supreme valour put the US government and its NATO country allies to shame for their abject collusion in Israel’s destruction of the Palestinian people. In Oaxaca, activist reporter Brad Will was murdered covering yet more repression by systemically corrupt, violence-addicted authorities in Mexico. Recently in Honduras, international solidarity activists bravely confronted the notoriously violent Honduran security forces in order to commemorate Berta Caceres and defend her legacy of resistance.

Over the last 50 years, the idea and practice of progressive and radical international solidarity has helped defend and support revolutions in Cuba and Nicaragua as well as the hard-fought revolutionary struggles in El Salvador and Guatemala. On Cuba, the example of European-based solidarity campaigns and the U.S.-based Pastors for Peace has been exemplary for decades. That kind of solidarity represents above all a tremendous outpouring of love and also an unwavering demand for justice. But when Sandinista Comandante Tomás Borge used to say that “solidarity is tenderness between peoples,” he was not thinking primarily of international solidarity from people active at grass roots in North America and Europe. He was thinking more of Cuba’s unparalleled example led by Fidel Castro, Che Guevara and their comrades.

Cuba’s solidarity has brought humanitarian relief, health care and education to innumerable people all over the world. Cuban and Libyan solidarity made possible the defeat of South Africa’s evil apartheid regime against the best efforts of the U.S. government and its European allies in its defence. With Comandante Hugo Chávez, Fidel Castro devised the concept of the Bolivarian Alliance of the Americas (ALBA) and the regional energy and food security program Petrocaribe: Those trade and development cooperation frameworks deliberately take solidarity as their guiding principle. For example, over the last decade, via Mission Miracle, Venezuela’s development cooperation resources and Cuban medical expertise have restored the eyesight of millions of people across Latin America and the Caribbean.

Less well known has been Venezuela’s financial support, buying bond issues at crucial moments to support other progressive governments like those of Ecuador and Argentina. Via Petrocaribe, since 2004, Venezuela has alleviated the acute economic difficulties faced by countries in Central America and the Caribbean as a result of volatile movements in international oil prices. The solidarity based ALBA framework has made possible infrastructure investment, helped guarantee food security and promoted economic democratization in all its member countries but especially in the most economically vulnerable, among them Nicaragua.

That example of solidarity is why, along with control of the region’s natural resources and strategic territories, the US government and its allies are determined one way or another to undermine and, if possible, destroy the ALBA bloc’s revolutionary and progressive governments. In a recent address to a congress in Managua of Sister Cities Linked to Nicaragua, veteran US solidarity activist Dr Arnold Matlin, stated “Never trust the U.S. State Department in its interaction with Nicaragua. For over a century, the U.S. State Department has never deviated from its goal - to make Nicaragua a U.S. colony. They have done this by military aggression, economic aggression, and political aggression … We owe it to the people of Nicaragua to continue to support their revolution, and to support the party of their revolution. We owe it to the heroes and martyrs to remember their sacrifice and to carry on their work.”

Dr. Matlin’s remarks are equally relevant for the other ALBA countries. Bolivia, Cuba, Ecuador, Nicaragua and Venezuela and even ALBA’s small Caribbean island nation members are all subject in varying degrees to US government efforts at destabilization.

The solidarity congress at which Dr. Matlin spoke brought together grassroots activists from across North America and Europe. Attending the congress were a group from Switzerland of around 30 activists from sister city associations, labour unions, and solidarity groups. This group and others took the opportunity to attend events in northern Nicaragua to commemorate the internationalist martyrs who were murdered by U.S. supported terrorists during the Nicaraguan war in the 1980s. The US government paid for and directed that war against the Nicaraguan people so as to overthrow the revolutionary Sandinista government. After the congress in Managua, the Swiss solidarity contingent visited the northern town of Somotillo for the 30th anniversary of the murderous ambush in February 1986 that killed Maurice Demierre, a Swiss agronomist and five Nicaraguans.

From the very start of the war, the frontier area around Somotillo was targeted by Somocista terrorists supplied, funded and trained by the US government who over time developed into the so called Contra. In 1980, barely 10 months after the 1979 revolutionary victory, in the local municipality of San Francisco, the Somocistas murdered a literacy program coordinator, Giorgino Andrade. Terrorist incidents in the area escalated steadily. On March 14, 1980, a team from the ex-Somoza army blew up the big Rio Negro Bridge near Somotillo. On July 25, another terrorist commando of over 100 fighters attacked the town of San Francisco Norte where they murdered 13 rural workers, publicly cutting their throats with the same bloodthirsty sadism as the Islamic State murderers in Syria or Iraq. From that period onward, Nicaraguans learned to get used to living in self-defense. Throughout the war until 1990 the Somotillo area was on a permanent war footing.

The Swiss group visiting Somotillo this year joined with local Nicaraguans to remember Maurice Demierre. Maurice was a conscientious objector who had come to Nicaragua with his partner Chantal in 1983 after several months in prison in Switzerland for refusing military service. During his work he regularly transported people, building materials, sheets for roofing or sacks of basic grains out into the remote hill country along the Honduran border. One February morning in 1986, his pick-up truck was found full of bullet holes and covered in blood. The Contra terrorists had murdered Maurice and five women travelling with him. They ambushed the vehicle and then finished off most of its occupants at close range. To its eternal shame, the Swiss government refused to recognize Maurice as a citizen killed overseas and refused to protest to the U.S. government, funders, suppliers and organizers of the terrorists who killed Maurice as part of the U.S. war against Nicaragua.

Jorge Capelán was in the militia reserve at the time and attended the commemoration ceremony in Somotillo. He remembers of Maurice, “Local people’s high opinion of Demierre was one of the first things I learned when I arrived to work in Somotillo on the agrarian reform, back then in the middle of the war. People told me “That chele is very well loved around here. He is a Christian and lives solely for this work with the rural communities here”... Somotillo has changed greatly over the last 30 years. Before it was a small impoverished town with dirt roads and most of its houses were built of adobe plastered cane. The Sandinista Revolution and its youthful literacy educators roused the area from the dusty slumber of centuries. Then the huge rural development project known as “Chinandega Norte” arrived promoting irrigation investment, agricultural cooperatives, housing programs and promises of a new life. All that development investment and effort was drowned in blood by the Contra war.”

The customary sign of Peace during the religious service that was part of the commemoration activities was one of extraordinary emotion, partly because, despite all the years that have passed, many people there were not unknown to each other, thanks to solidarity links built up over the years since Maurice died. María Lidia Betancourt greeted the visitors relating how she and her two small daughters survived the 1986 attack but lost her mother Rubinia in it. Many others remember Maurice, Rubinia and the other women victims. Ernesto Espinoza, was a member of the Christian base communities who worked with Maurice Demierre. He relates how a group of women asked Demierre to help them getting back to their outlying communities. Ernesto was usually the driver and he tried to persuade Maurice not to go because word had it that the road was dangerous around then. Ernesto remembers Maurice as “a very determined man, guided by high ideals of justice rather than his own flesh and blood interests”.

Along with the sadness and anger there prevails too the strong belief that those who died have defeated their murderers by living forever honoured in the ultimate victory of the achievements for which they gave their lives thirty years ago. Maurice’s former partner Chantal sent a message saying:

“On this day of commemoration I want to salute all the families of our loved ones who died in that covert war thirty years ago in which the Nicaraguan people demonstrated their courage, their valour and their immeasurable love to defend the building of a society more dignified and just for everyone.

I want to greet especially the relatives of the women who died with Maurice so they know that our men and women, sisters, brothers, children, did not die in vain. Because they all live very deep in our hearts despite the difficulties peoples and governments encounter in trying to care for our world and the difficulties all of us face trying to care for our own selves.

They show us the way in which solidarity is the tenderness of our peoples. They give us strength every day, since we need that strength...there is so much to do to be able to live in a world where there is land and work for everyone, education, culture, health, respect for the natural environment… yes there is so much to do…

But let’s never forget either that there is room for everyone, room for our differences … Yes, humanity is capable of realizing our dreams, the dreams of our fallen, which is the same dream as Sandino. I hope this day is a marvellous one for you and that you are able to enjoy sharing it.

This poignant story is just one among countless others across Latin America and the Caribbean, let alone the rest of the world in the numerous countries destroyed by the United States government and its allies, from Korea to Vietnam, to Libya and Syria. People young and old at grass roots will forever remember the sacrifices of selfless people like Maurice Demierre and so many others. The existence of these undying bonds of solidarity enable people everywhere to build an identity of practical, anti-imperialist cooperation, but also of truth and light and dreams against the mendacity, oppression and murderous violence of terrorist states like the US. They testify to the existence of enduring resistance to the evil and cruelty of capitalism, a pure nucleus centred on love for the human person and the natural world, despite all the brutality, banality and indifference promoted by a racist, arrogant imperial culture now in slow but irreversible decline.