Rock around the Blockade celebrates 26 July 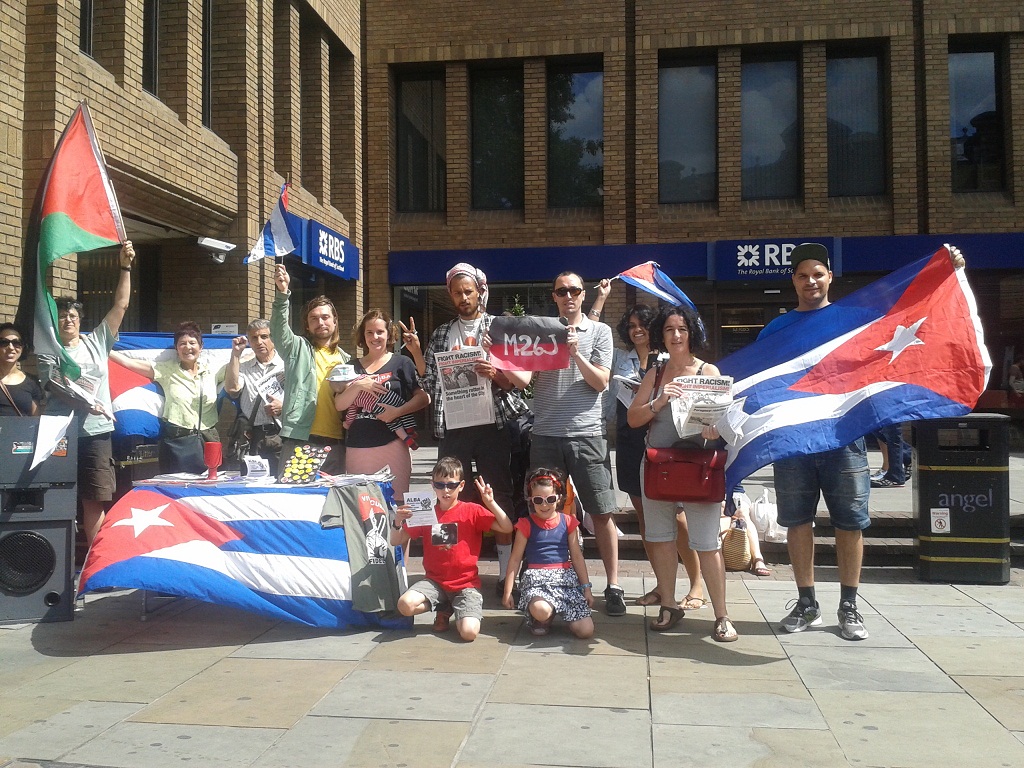 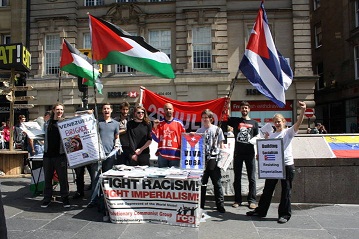 Activists from Rock around the Blockade, a campaign of the Revolutionary Communist Group took to the streets on Saturday 28 July to celebrate six decades of socialist Cuba, commemorating the 59th anniversary of the attack on the Moncada Barracks which marked the beginning of the Cuban Revolution. Following the military coup of US-backed dictator Batista in March 1952, Fidel Castro and others organised an armed movement against the tyranny and repression meted out by Batista. On 26 July 1953 in Santiago de Cuba the revolutionaries carried out an audacious attack on the Moncada Barracks. It failed militarily but succeeded politically, sparking the mass movement and guerrilla struggle which led to the triumph of the Cuban Revolution on 1 January 1959.

In Newcastle at Grey’s Monument, in London in Angel, Islington, and in Manchester at Piccadilly Gardens, comrades held colourful street rally celebrations with speeches and music, flying Cuban, Palestinian and Venezuelan flags symbolising resistance to imperialism. In Manchester the events were followed by a showing of the film Salud! which documents the impressive example of Cuba’s international health brigades that have treated millions worldwide. The political message was clear....No to War! No to Austerity! Socialism is the alternative! Viva Cuba!

Speeches recounted the historic attack on the Moncada barracks and the triumph of the Revolution, highlighting the inspiring beacon of hope that socialist Cuba offers to those fighting injustice worldwide. Compared to the appalling record of British Imperialism and the crippling reality of the capitalist crisis that is inflicting wars worldwide and austerity across Europe, the Cuban example of socialism and internationalism deserves to be held high.

The day of action also highlighted the importance of the forthcoming Venezuelan presidential election by marking the 229th anniversary of the birth of Simon Bolivar, the national independence leader who is recognised as the liberator of five American countries: Venezuela, Colombia, Bolivia, Ecuador, and Peru. This coincided with events in over 100 cities worldwide showing solidarity with President Hugo Chavez and the Bolivarian revolution of Venezuela. As Chavez himself declared on 1 July this year ‘Venezuela is at the centre of an international battle...The future of humanity is in play here: between socialism and capitalism...in the next 100 days, the next 100 years in Venezuela are going to be decided’.

We are absolutely sure of our role in this battle, to fight for socialism as a viable alternative, to raise awareness and demand solidarity with Socialist Cuba and the Bolivarian revolution in Venezuela.

Not only is a better world possible, but it is being built in Latin America today!