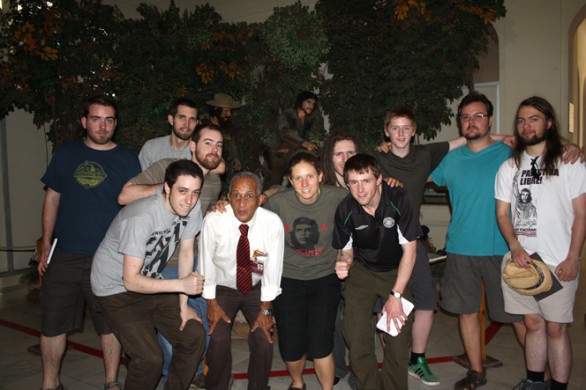 £1,000 of material aid raised here in Britain was donated by the brigade to sports projects and hospitals in Cuba, breaking the vicious US blockade which has sought to strangle the Cuban revolution for over 50 years.

The brigade was titled 'Justice for the Cuban 5' in solidarity with the Cuban prisoners serving life sentences in US jails for trying to protect Cuba against terrorist attacks against Cuba, planned from within the US.

Over the next few weeks the brigadistas will be sharing their experiences at a series of meetings across Britain ( see link below for details). The RATB website, will also feature a series of articles written by the brigadistas, with more details about the key themes that emerged from the brigade.

A revolutionary alternative to austerity and war

The experience of the brigade shows that those predicting the demise of the revolution will be disappointed. With grassroots participation and political discussion at all levels, the Cubans are making necessary updates and changes to safeguard their socialist system. Cubans are well aware at what cost they achieved their revolution, and what they would stand to lose if it was defeated.

As a British warship patrols the waters around the Malvinas islands and the Cameron government talks of military attacks in Somalia and Iran, the contrast with Cuban internationalism is stark: the thousands of young students studying at the Latin American School of Medicine; the Cuban educators and health professionals returned from missions in the barrios of Venezuela; the veterans of struggles against apartheid in Angola. As one member of the Cuban Women's Federation told brigadistas, 'Cuba doesn't give what it has left over; it shares what it has.'

The message the brigadistas bring back is clear: the Cuban revolution remains a beacon for the working class and oppressed throughout the world as capitalism drags us deeper into economic crisis and war. A better world is possible only with socialism!

Don't miss your opportunity to hear the brigadistas speak at a meeting near you and see unique photos and video footage. Download the brigade report-back leaflet for a full list of dates: