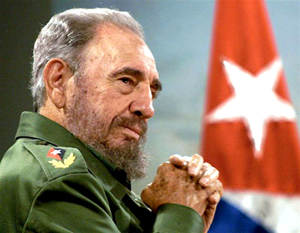 There are many misunderstandings and lies spread about Cuba on the issue of homosexuality. Therefore it is worth noting what Fidel Castro said in his interview with the Nicaraguan Tomás Borge in 1992.

From Face to face with Fidel Castro

Tomás Borge: Many people think that there is sexual discrimination in Cuba. What are your views on homosexuality?

Fidel Castro: I don't consider homosexuality to be a phenomenon of degeneration. I've always had a more rational approach, considering it to be one of the natural aspects and tendencies of human beings which should be respected. That's how I view it... I am absolutely opposed to any form of repression, contempt, scorn or discrimination with regard to homosexuals. That's what I think.

Capitalism is a society of wolves

Speech by President Fidel Castro at the concluding plenary session of the Sixth Congress of the Union of Young Communists (UJC), in the Plenario Room at the Convention Palace in Havana 4th April 1992

Today we are not only closing the Sixth Congress, we are also commemorating the 30th anniversary of the creation of Cuba's Union of Young Communists (UJC). The decision made at that time, when we were debating what to call our youth organization, has great significance. It was once called the Association of Rebel Youths. I remember clearly that I proposed the name UJC. (Applause) It was the name that best fitted our convictions, and today we are proud of that decision.

Details
Written by Other sources
Created: 07 May 2011

Montesquieu said history is the noise surrounding certain events, but there are events that are simply not noise, like the collapse of the socialist countries and the survival of the Cuban revolution. Does this at mean you are going down in history?

Sixth Anniversary of the Victory of Playa Giron

Relatives of those who fell at Giron,
comrades of the Revolutionary Armed Forces:

Today is another anniversary of the historic battle of Giron. Under what circumstances do we commemorate this sixth anniversary? In 1961 the enemy carried out, with the mercenary invasion of Giron, one of the many chapters of his program to destroy the Cuban Revolution. It was neither the first nor the last attempt. Not much time passed, and once again the aggressive policy against our country let to the October crisis. It has not slacked off for a single day in these eight years of revolution. They have used all their weapons uselessly against us. Those activities have ranged from sabotage against our economy, economic blockade, the organization of counter-revolutionary bands, armed landings, assassination plans, and all in all whatever means have been within their power to vanquish our revolution.

ANNOUNCER: Good evening, televiewers. All Cuba's radio and television stations are in network this evening to carry the statements by the Prime Minister of the revolutionary government and the secretary general of ORI, Maj. Fidel Castro Ruz, at a particularly delicate time in the history of the world.

The Counter-Revolution is a Rotting Worm

The lard problem and imperialism

In a sensational and eagerly awaited appearance before the entire nation on television and radio, the Prime Minister of the Revolutionary Government, Comandante Fidel Castro, made an exhaustive analysis of the problems of supply, the recent economic aggression by the imperialists, and also, in contrast, the renewed aid from the socialist world. The panelists questioning him were Comrades Raul Valdes Vivo, Comandante Guillermo Jimenez and Ithiel Leon, with Comrade Luis Gomez Wanguemert acting as moderator.

Speech to the citizens of Santiago

Speech made at the Cospedes Park in Santiago de Cuba.

People of Santiago,
Compatriots of All Cuba,

Friends from foreign countries, visitors' delegations, comrades of the revolution:
During the course of the history of humanity, the causes of war have been exploitation and plunder. Ever since man has been aware of historical evolution, all wars have been caused by these two reasons. In order to understand who is guilty of war and who is fighting for peace, one must understand that perfectly well. Those who support war, those guilty of war have always been the exploiters, those who seek to seize the wealth and the natural resources of other nations, of their own people. Thus exploitation and plunder have cost people oceans of blood.

Speaking here tonight I am presented with one of the most difficult obligations in this long struggle which began on Nov. 30, 1956, in Santiago. The people are listening, the revolutionaries are listening, and the soldiers whose destinies are in other hands are listening also. this is a decisive moment in our history: The tyranny has been overthrown, but there is still much to be done. Let us not fool ourselves into believing that the future will be easy; perhaps everything will be more difficult in the future.