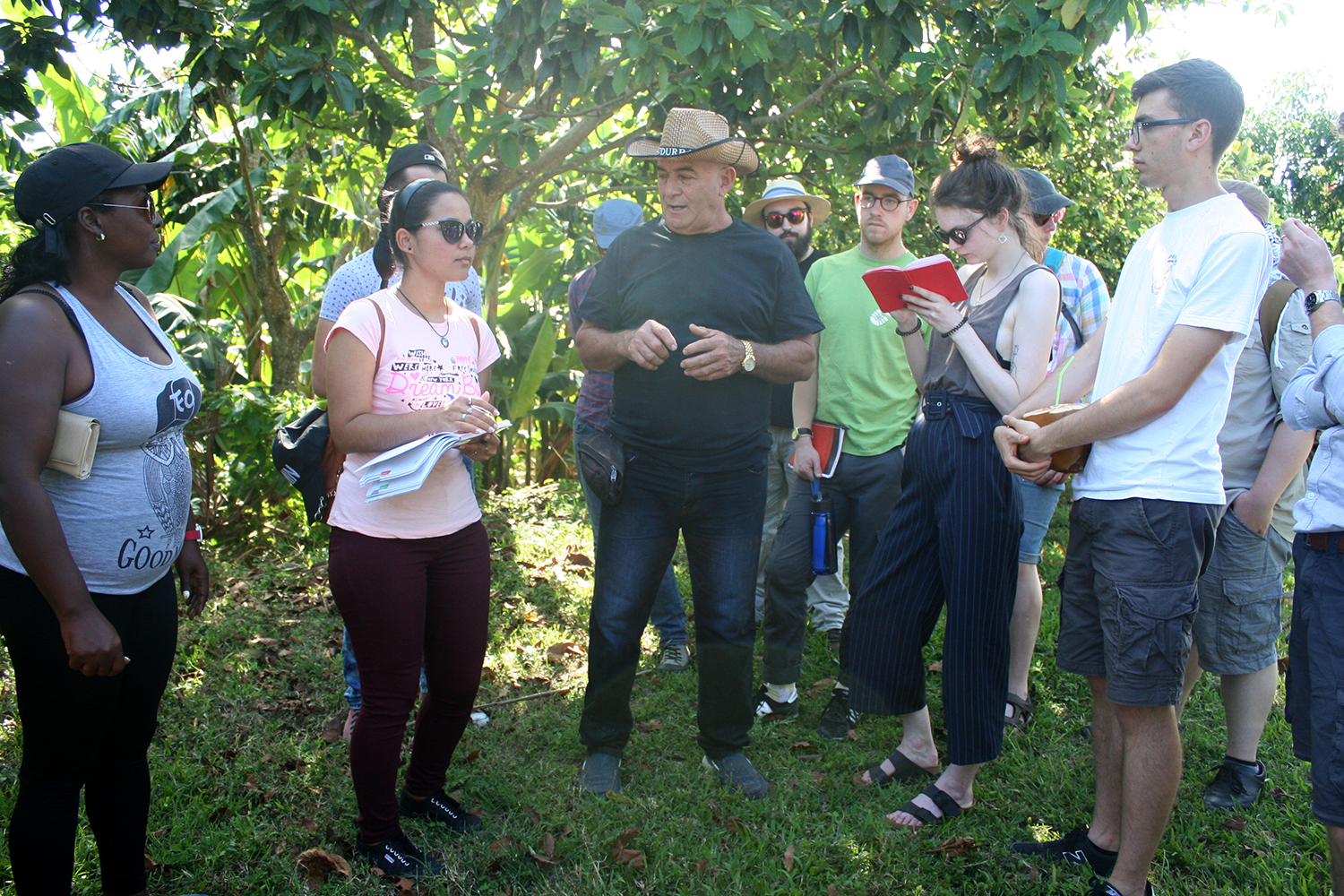 The triumph of the 1959 Cuban revolution overthrew the existing property relations in Cuba. In May of that year the new revolutionary government introduced its first Agrarian Reforms, expropriating idle and foreign owned, largely US, land to redistribute among those working it. Historically land had been reserved for the upper-class and imperialists, who had turned Cuba into a sugar-producing colony. The result was the loss of 90% of Cuba’s forests; destruction of ecology from monoculture and a reliance on imports. Further reforms subsequent to those in 1959 have solidified the process of worker ownership of land. Now in socialist Cuba any individual can apply for access to idle land, on the condition that they use it to produce, with a proportion of that produce going to the state to redistribute among society.

Such was the way the Leonor Perez agricultural cooperative, named after the Cuban revolutionary Jose Marti’s mother, was founded in La Lisa municipality, Havana province. We visited the co-operative on our brigade to learn more about Cuba’s commitment to environmental sustainability. The cooperative is one of four in the municipality and 88 in the province, providing to over 2,000 institutions and organisations across Cuba. It spans 179 hectares and is made up of 255 associates, grouping together local farms and farm workers. The main focus is on producing diverse crops, milk and livestock, though they also produce medicinal plants. Though the co-operative can sell its surpluses through private farmers markets, the primary function is to satisfy the needs of the state.

Environmental protection is enshrined in Cuba’s 2019 constitution, affirming that the state will ‘promote the conservation of the environment and the fight against climate change, which threatens the survival of the human species.’ Almost 9 million Cubans (of a population of 11.5 million) took part in debates and discussion on the constitution, before almost 60% of proposals were amended on recommendations from the population and put to a referendum where over 85% of voters approved the new document. The constitution was therefore the voice of the Cuban people, who guided and endorsed the process. In promoting the conservation of the environment, the Ministry of Agriculture provides subsidies to farms which adopt agro-ecological methods. On a tour of Leonor Perez we were shown some of the ways in which it was meeting the demands of the new popular constitution. 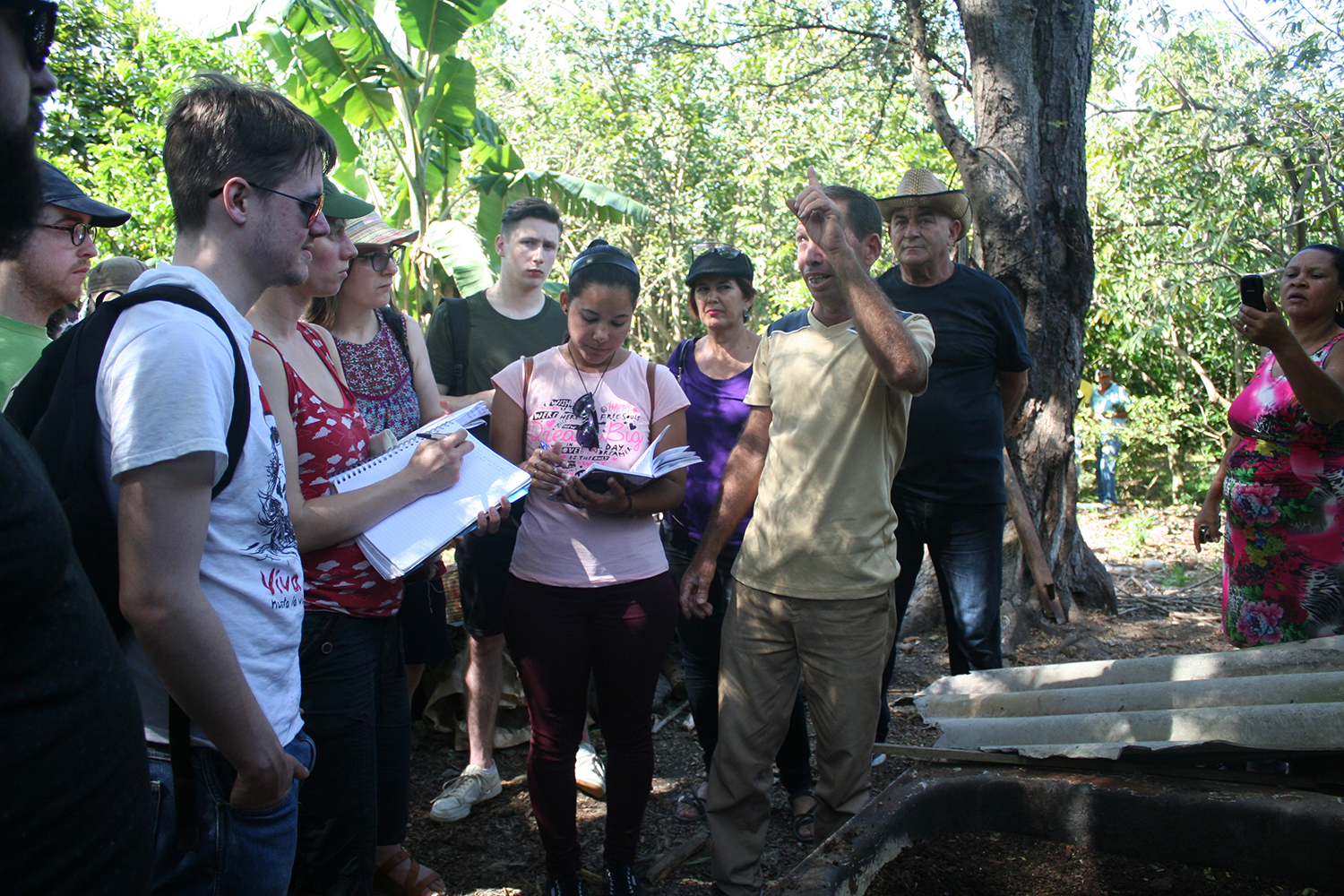 Instead of using chemicals, which the farm has banned, it opts for natural and organic fertilisers. For example, worms are used to help decompose animal manure, collected from animals on the farm, to create a natural and non-polluting plant fertiliser which eradicates the large carbon footprint that accompanies transporting equipment in. Other techniques include working with local ecosystems to preserve biodiversity, leaving the freshly cut grass on the soil to work as a natural compost and forbidding anything from being burned on or near the farm so to preserve the minerals in the soil.

Because of central state planning, farmers are not in competition with each another to sell their produce. Working towards a central plan, all farmers know that their produce will be sold because they are producing what society needs. Without this element of competition farmers regularly exchange knowledge on local and national levels, swapping ideas and materials to help each other become more environmentally sustainable in their approach and to raise production levels. Idalmis Almaquer, a representative from the Communist Party talked about his role in conversing with the workers to facilitate conversation and ensure they are setting a good example of socialist values.

This reality is so different from what we experience under a chaotic market system in Britain, where capitalism’s primary interest in accumulation necessitates environmental destruction in an international war of the rich against the poor. In competition for profit, British supermarkets are forcing environmentally unsustainable consumption patterns on sections of the better-paid while 8.4 million people in Britain struggle to afford to eat. Supermarkets force this consumption in part by importing millions of tonnes of food from poorer nations to sell all year-round. Peruvian asparagus is one such product that we can now buy in a shop in any month of the year. Peru receives very little of the supermarket price, and Peruvian farmers even less, with 70% of the final price going to the supermarkets.

Asparagus is grown in regions in Peru experiencing acute water shortages, such as the Ica Valley which receives little or no rainfall. Water is taken from the river and local aquifers to grow the produce for Britain, its third largest importer, and other European countries, drying up the aquifers and driving local farmers from the land. The massive carbon footprint of the thousands of jumbo cargo planes transporting the food is counted against Peru.

Before the Cuban revolution, Cuba had experienced similar imperialist plunder. It had been turned into a mono-crop economy dependent on sugar production and reliant on the US to buy that sugar; by the 1940’s sugar accounted for 86% of Cuba’s exports, 80% of which went to the US. US companies produced two-thirds country’s sugar by the 1920s. When the revolutionary government introduced its first agrarian reforms, US business interests were directly affected, provoking the US government to cut its sugar quota down to zero to strangle the Cuban economy. The Soviet Union stepped in buy up the remaining sugar, but Cuba was still faced with the problem of being a mono-crop economy without food sovereignty.

Food sovereignty is still an issue, made more difficult to achieve as Cuba is under the US genocidal blockade, costing Cuba $12 million every day. In trying to tackle the problem the government are focussing on diversifying produce and reducing imports. While walking through Havana we came across urban farms, organiponicos, a government initiative to reduce food imports which has been of great success: as of this year 70% of all fruit and vegetables consumed in Havana are grown in Havana.

We spent an afternoon volunteering with the Union of Young Communists in the fields of the ‘La Rosita’ farm and discovered how exhausting working under the hot sun can be. Jendri Rodriguez Gonzalez, a production specialist at Leonor Perez described drawing his motivation to work in scorching heat from knowing the food they produce is going towards maintaining crucial sectors such as education (sending produce to schools and nurseries) and healthcare (also providing for hospitals). Another farmer explained that he was also a teacher but farmed because it was what he liked doing. The cooperative enjoys help from voluntary student brigades throughout the year and youth were identified as leading the 60 years of the agrarian reform celebrations.

A representative from the cooperative committee spoke about the multitude of cultural and educational activities that take place there. Despite being in a rural pocket of Havana, the cooperative has an on-site library and participates in the Educate Your Child programme. It runs arts and crafts sessions, offers archery lessons, provides cooking workshops and organises games activities. The FMC (Federation of Cuban Women) run workshops and lectures, catering to the elderly to ensure social inclusion. 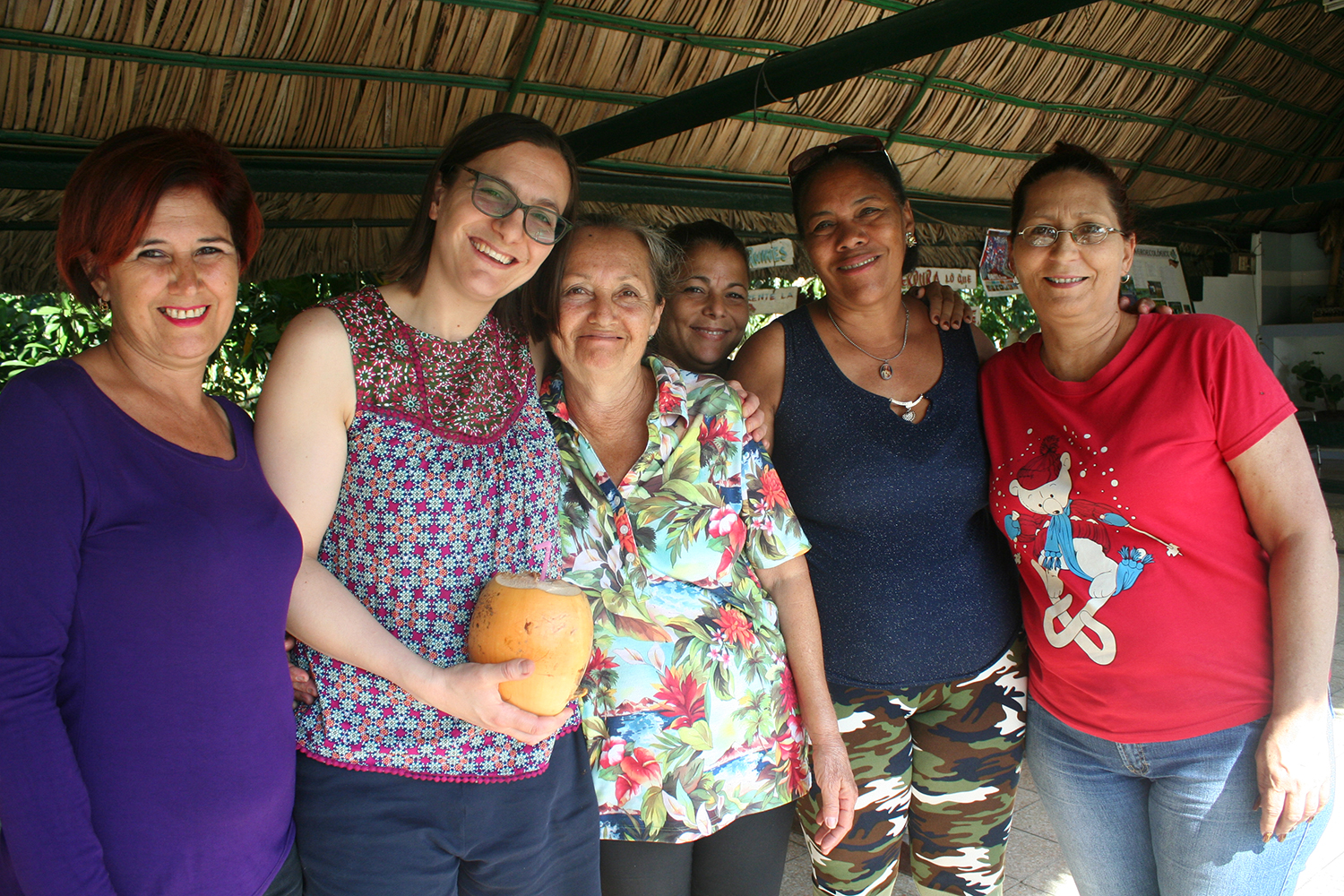 Whereas in Britain the government declares a climate emergency, only two days later quadrupling VAT on solar panels, socialist Cuba is pioneering in sustainability while meeting the health, education and cultural needs of its population. The World Wide Fund for Nature in its 2006 Living Planet report, declared Cuba’s model of development the most sustainable in the world whilst in May 2019, Consuelo Vidal-Bruce, resident coordinator of the United Nations applauded Cuba as a world reference for sustainability. 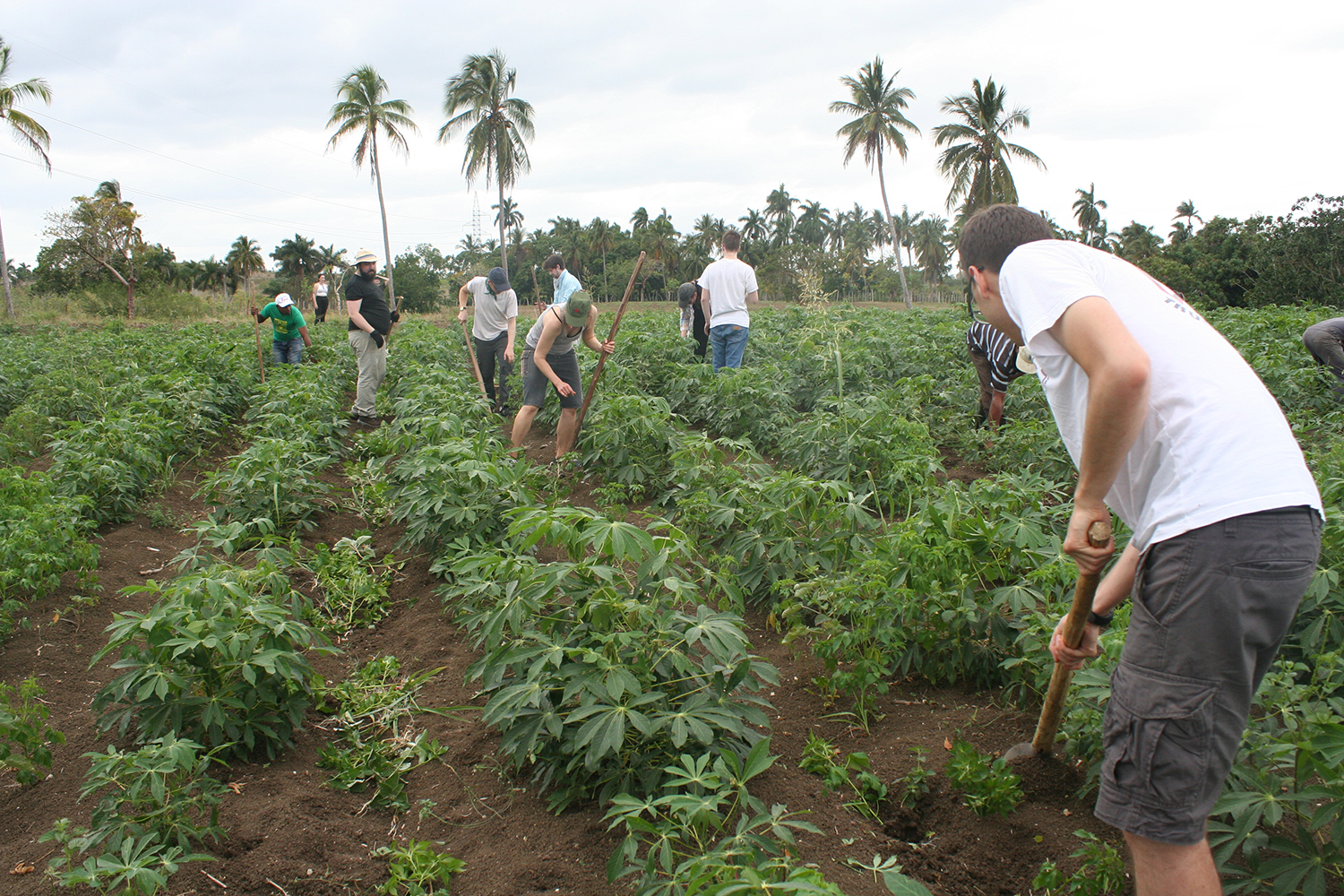