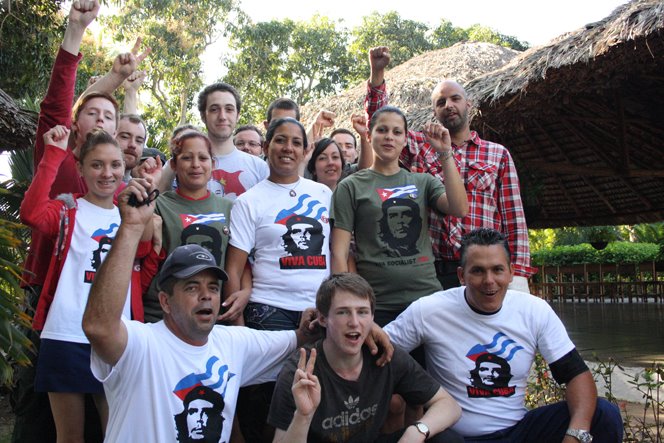 Photo taken during the last brigade to Cuba ‘Justice for the Cuban 5’ solidarity brigade – February 2012.
Click the link to see more photos and report.

Lift the blockade of Cuba!

The 13th solidarity brigade of the British campaign Rock around the Blockade will travel to Cuba between late April and early May 2015. The group is collecting funds now to buy material aid for Cuban youth – this time they will take ballet shoes and boxing gloves to training schools. While breaking the US blockade, the donation will contribute towards Cuba’s remarkable achievements in promoting and democratising sport and culture.

Hosted by the Union of Young Communists, the brigadistas will visit a variety of cen­tres, institutions and organisations, meeting political and student lead­ers and doing agricultural work. They will visit maternity and old peoples’ homes, youth, neighbourhood and cultural groups and research institutes. They will learn about the daily impact of the US blockade, which prevents the Cuban government from buying medicine, food, technology, equipment and resources in every sector, and which has been condemned for 23 consecutive years by the UN General Assembly.

For 55 years, Cuba has maintained and increased its free social provision despite the impact of the US blockade. This presents a contrast with the austerity measures implemented by the British government which are attacking public services, jobs and benefits and causing a return to the poverty, inequality and destitution of the pre-welfare state era. Such differences are also seen in Cuba’s response to the Ebola epidemic. While most of the world tightens border controls and the United States sends 4,000 troops, Cuba is sending nearly 500 medics to West Africa to treat the sick and help stop the disease spreading. Cuba’s medical contribution is greater than the rest of the world’s put together – just as it was in response to the 2010 earthquake which devastated Haiti, when Cuba’s medical contingent treated 40% of the victims. The Cuban Ebola-trained specialists will join some 50,000 Cuban-trained health workers in nearly 70 countries today.

How can a small, blockaded island have such a global impact? Why are Cubans so prepared to assist others around the world? Is this a product of a socialist society? What is socialism like in practice? What about the changes underway in Cuba today?

Through this fraternal exchange, activists on the Cuba Vive brigade will study the achievements and challenges of the Cuban Revolution and socialist construction. What they learn will be discussed with people back in Britain through report back meetings to be organised around the country.

Contact us to be a brigade sponsor or to organise educational or fundraising activities and report back meetings in your area. Facebook: www.facebook.com/ratb.cuba

Please donate generously via PayPal or by sending cheques or postal orders payable to:
Rock Around The Blockade at RATB BCM Box 5909, London, WC1N 3XX.