The battle for peace and social justice in Colombia 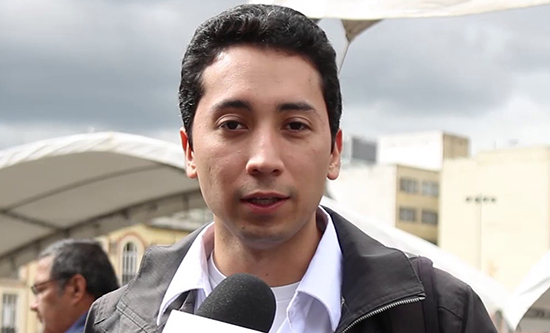 Interview with Marcel Guarnizo from the Colombian Youth Communist Party.

To give you some perspectives from the Colombian Communist Youth, we understand that the political situation in Colombia in terms of in the peace accords signed between the Colombian government and the FARC-EP remain systematically unimplemented and incomplete on the part of the Colombian state, generating a situation of vulnerability for ex-combatents of the FARC, who were counting on re-incorporation into legal, political and social life after laying down arms. This is crucial in the quest for peace in our country.

Instead, they are excluded from Colombian society. The government instead is developing the systematic politics of exterminating social movements in Colombia, assassinating social leaders. Since the singing of the peace accords, over 600 people have been assassinated, of those,  more than 190 are ex-FARC combatents, already unarmed, already incorporated in the peace process. This illustrates a very complicated situation, flowing from the violation of human rights on the part of the Colombian state, and its failure to guarantee what is necessary for a stable and legal peace.

We are confronting these politics with protest and social mobilisation. The youth and the student movement are leading big mobilisations in defence of high quality, free, public higher education,  which is the responsbility of the state with sufficient funding. These mobilisations have been peaceful, creative, harnessing the enthusiasm and vaiience of Colombian youth. However, they have been repressed to the extent that we have had students who have lost their eyes at the hands of state forces who have repressed these protests and police infiltrators in the student movement who generate acts of violence, to give an excuse to repress the student protests. This repression is not just against students, this kind of thing happens anytime there is an expression of social movements in the streets.

So we are encountering a very adverse scenario in the poliitcal struggle in Colombia. if the peace accords were a triumph of Colombian society, the process of implementation has not been what we hoped and the Colombian state with the government of Ivan Duque, is now trying to implement a neoliberal economic agenda, this 'paquetazo' on top of measures we have already renounced including a labour reform, a pension reform, a taxation reform, and the first victims are going to be the youth.

If the pension today is a right that is dificult to get, with the pension reform proposed by Duque, it will be impossible for youth to recieve anything in the future. Again with the labour reform, one of the proposals is to pay young people less than the legal minimum salary. This is an abherration, the total super-exploitation of youth labour is proposed as a benefit for the youth, they pretend to be doing us a favour in order to exploiit us more than the rest of the labour force.

So these are some of the challenges of the anti-imperialist fight in Colombia and we have been partipating and building for national strike actions, to paralyse the economy, to paralyse the streets and pressure Ivan Duque against his neoliberal agenda so that it can't be implemented in our country, corresponding to the spirit of fight and resistance across the region, in solidarity with the people of Chile, Ecuador, Haiti that is developing in our America.

Finally in a key issue for the anti-imperialist struggle in Colombia, the US government intends to use Colombia as a pivot for the destabilisation against the people of Cuba and the people of the Bolivarian Republic of Venezuela. In this, Colombia is aiming for an invasion so they can take up arms against venezuela. and so that Ivan Duque can cut relations with Cuba. Cuba is one of the countries to guarantee the dialogue for peace between Colombia and the ELN, and so this will be used to stop pressure on Colombia in these talks, to break down the talks so that the delegation of the ELN can be extradited to Colombia from Cuba.

So we demand a political solution as our main banner to supercede the  state of war in our country, and we demand the implementation of social justice as a way to guarantee no repetition and no return of the war in Colombia. If the Colombian and US governments aim to develop the politics of destabilisation against Cuba and Venezuela, the Colombian Communist Youth are clear, the first line of defence is to construct a trench of stone and ideas, to defend the revolutiuonary process in our American continent.

The role of the international community is fundamental, first because international observation can place more pressure on the Colombian state to guarantee and comply with the Havana peace accords.

People think that because peace accords were signed, there is already peace now in our country, but no, peace doesn't already exist in Colombia, there still exists armed paramiliatries, the process of implementing the peace process is still lacking the most important element, to improve the conditions that caused the confrontation in our country. Social, economic and political inequality.  We need solidarity in denouncing this internationally.

These are the main elements of international solidarity we ask for to support our struggle,  helping to make these fights and demands visible.