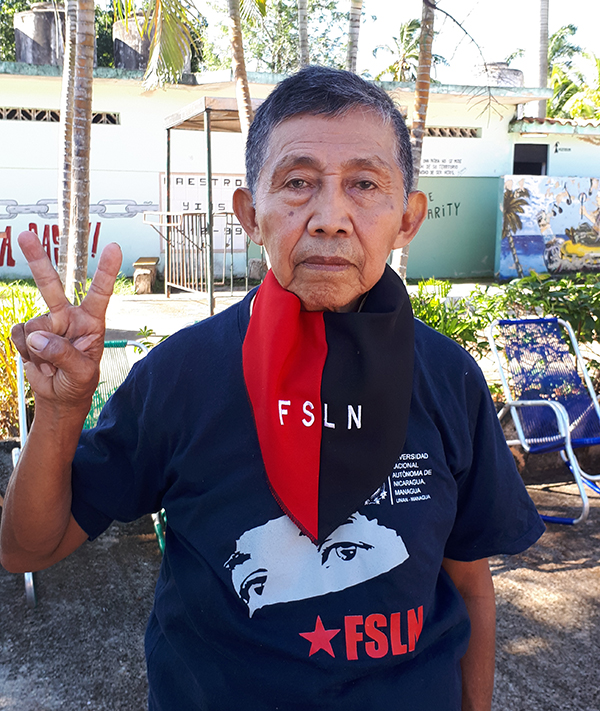 The tranques (violent street protests and barricades) started in Managua on 18 April. In Masaya where I live, they started on 19 April with demonstrations of 5000 people, but from all of the departments they weren't all from Masaya.Afterwards there were thugs with bombs, contact bombs and rifles and attacks on the police.After 15 days they began the tranques,these violent barricades, where all the criminals of Nicaragua, narco traffickers, marijuana traffickers, bandits, and all types of those who are not engaged in society. The tranques were in place for two and a half months across the department. no-one could leave to sell, no one could go to their shops or the market, because they shut the routes with the tranques and to pass a tranque was very dangerous, because they assassinated you, for this we called them the tranques of death. Commandante Daniel(Ortega – President) pushed for dialogue and negotiations with the coup plotters.The coup plotters said that if the policestayed off the streets they would dismantle the tranques. Commandante Daniel removed the police but they did not dismantle the tranques, they increased them. The cities were in the hands of the terrorists, because the police were in their cuartels. They threw out civilians from their houses , anyone who was a militant of the FSLN they tortured them then afterwards assassinated them. Women, youth and adults. Before this they burned down the radio and TV stations to prevent them from broadcasting the truth.They could not bury the truth, because it was shared on the internet.They demanded intervention from the OAS and the UN, but there was no interest in documenting the real massacres, the real attacks on human rights. Instead these bodies operated as a clear expressions of North American imperialism.Why do they talk of human rights? to use as banner to occupy other countries. Why do they talk of freedom of the press if they lie internationally,why speak of the rights of people if they attack the people?

The dialogue was a circus, the church and Opus Dei order backed terrorism. We saw this and so the FSLN began to mobilise.  We organised a huge day of action with marches to mark the 19 July 1979 final battle to overthrow the Somoza dictatorship, the day the dictator fled. It is always celebrated as a day of happiness in Nicaragua. So we organised to defeat the violence in the streets with popular mobilisation. The international media and their press sources from the coup plotters said that this was an expression of war, that with these mobilisations we wanted to assassinate the people , kill the women, but all this was false. Instead our people went into the streets, tens of thousands, they mobilised, they stopped the tranques with daily protests. The people took back the streets, this terrorism woke up the people to take a decision to march forward, to continue our project, to develop economically, socially and politically. Our slogan was 'they couldn't and they cant!'. They couldn't with Nicaragua  they couldn't with Venezuela, they couldn't with Cuba, 'Patria libre or muerte - free homeland or death! Venceremos!'