A view from Oaxaca: Interview with teacher Jose Picasso 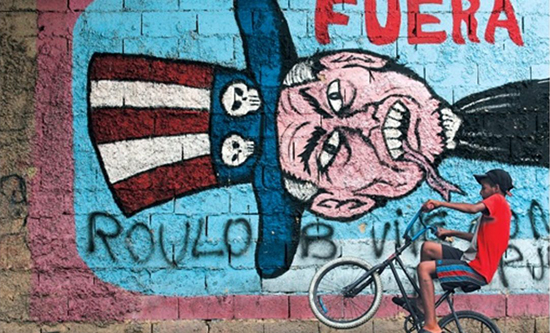 Short interview by Revolutionary Communist group delegation to the Anti-Imperialist conference of solidarity, for democracy against neo-liberalism, Havana, Cuba November 2019

My name is Jose Picasso, I am a teacher in a rural zone in an indigenous community, in the state of Oaxaca, south-west Mexico.

In 2018 a new government took over, [headed by centre-left President Andres Manuel Lopez Obrador- AMLO of the  National regeneration movement – MORENO party]. Formed as an anti-neoliberal government, it has sparked the hopes of many, giving us more energy to enter and create new spaces of participation. In the context where I am working, the youth are now being prioritised. Why? Because the poor youth with few resources have only faced two options in these difficult economic conditions, to leave and migrate to the United States or to join criminal organisations. They have low expectations, their life expectancy is short which generates more problems, without solution.  The current government is trying to find solutions to this problem, not just with aesthetic changes, but looking at their backgrounds; the government wants to solve the problem from its roots. One way they are doing this is prioritising youth to receive support, in education, with grants and scholarships. For those who have already left education, the government is subsidising projects like Youth constructing the future, where youth can train and work with carpenters, people in services,  mechanics or other professions, subsidising and training these young people.

On the question of the indigenous struggle, there are two strands. One is the fight of the Zapatistas [Zapatista Army of National Liberation, that controls territory in southern Mexico], who say they are enemies of the state, and right now there does not exist a method of coordination between the Zapatistas and the Mexican state.[1]The Zapatista movement is very strong and works in its autonomous zone, they have created their own mechanisms to live.

As for the other indigenous populations, they were part of the force that ensured the president could be elected. The president made a tour of the country covering 90% of the municipalities. Many populations made their demands heard, so now the government of Mexico is beginning to channel resources to these communities.

I believe there exists the danger of coup d'etat in Mexico. We cannot consider the government socialist, nevertheless the president has touched the sensitive fibres of power. We consider that we have won a government, but economic power has hardly changed, and we are not only confronting the traditional political parties but the entire political system, including the United States and the IMF. We are playing with the major powers of neo-liberalism. I would like to celebrate the triumphs of the left in Latin America, like the recent election in Argentina, because it gives us more scope to make deals, exchanges, and promote regional trade so that Mexico is not constantly dependent on the north, on the United States.